What is Persuasion Marketing? (2,000 people want to know) 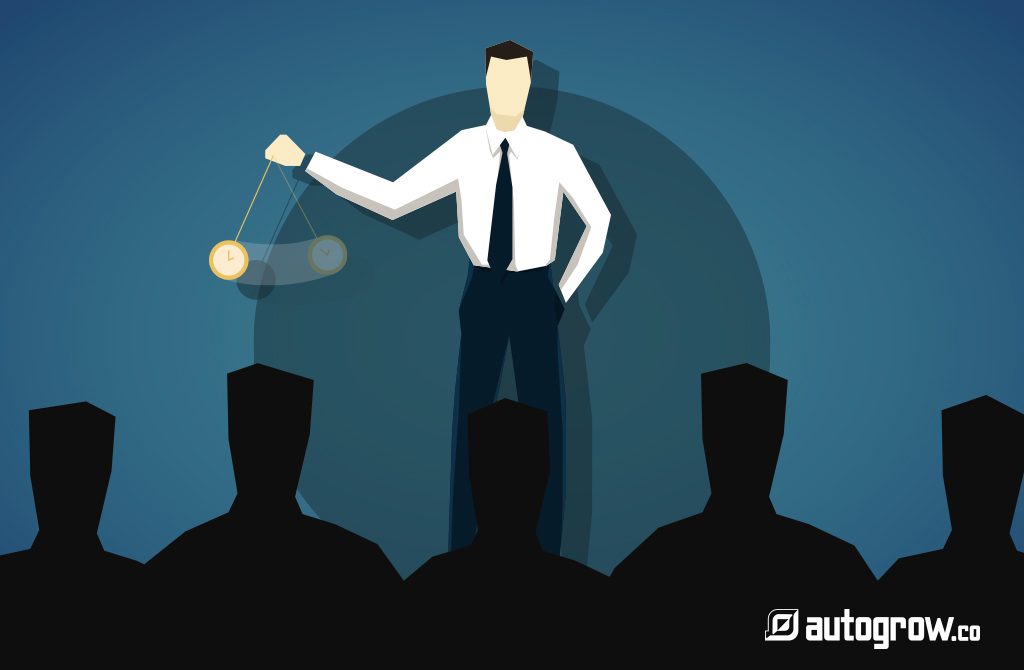 As humans, we don’t make rational decisions when it comes to buying. We are so influenced by context, our own history, neurochemistry—even the color of a button.

In marketing, you can either make rational appeals to persuade, using logic, or irrational appeals, like an urgent 24-hour-only offer—or even social proof.

Persuasion marketing, therefore, is the study and practice of marketing with the view that as humans, we think we’re rational.

But, that’s all an illusion because observation and research show our decisions are influenced in completely irrational ways that go unnoticed.

I first stumbled upon the idea of persuasion marketing through a blogger who analyzed the political campaign leading up to the 2016 election.

He looked at the language each candidate used, and why one speech was more persuasive than another. He even correctly predicted the outcome of the election thirteen months before the polls opened, as well as other key events.

The messages going out around this time made me think:

What can I learn from this new view (or “filter” on reality) that I can apply to digital marketing and sales funnels?

How can I use it to drive leads and conversions?

In this article, we’re going to answer those questions and more. We’ll also include supporting case studies and data that dig into the psychology of persuasion marketing.

A Definition of Persuasion Marketing

First, let’s review to get a clear definition of persuasion marketing:

Persuasion marketing is the idea that people are able to make rational purchase decisions some of the time, but much of the time, they don’t.

Instead, people make decisions based on emotion and factors that are not logical reasons, like the fact that other people have bought a product.

Perhaps the most interesting anecdote about persuasion marketing is that it works even if you are aware of how it works.

According to a Mental Floss article, if you hear the word “bah”, but the lips of the person in front of you are saying “fah”, you’ll actually hear “fah”, instead of “bah”.

Have a quick look at this video to see what I mean:

Harry McGurk discovered this phenomenon back in 1976. His takeaway was that “speech perception isn’t just about sound —it’s also affected by vision, and the integration of the two.”

Basically, what we see overrides what we hear.

And as you saw in the video, even if we know the audio is always “bah”, we can’t stop hearing “fah” when someone moves their lips to say “fah”.

I was surprised the first time I watched it.

The idea with this example is to further prove how irrationally we perceive reality.

By the way, did I mention that you shouldn’t use persuasion marketing for evil? Yeah, you’ve got to be ethical in how you apply it.

How to Use Persuasion Marketing in Your Sales Funnel

There are countless ways to use persuasion marketing in some part of your funnel.

You could change something as simple as the color of a button on your sales page, or even the sizing of a font.

Different colors or fonts make people feel and think in different ways. As people, we are influenced to buy based on emotion because of the way something makes us feel.

Below are a few case studies showing how persuasion marketing has worked in different scenarios. Each study reinforces all the ways you can use it to:

The Rule of 100 Is Useful for Product Offer Pricing

Jonah Berger, an author and Wharton marketing professor, spoke to Business Insider about what he calls the Rule of 100. This is a concept he also writes about in Contagious: Why Things Catch On, a book on the psychology of sales.

Berger says it’s all about the value of an item and how you price it.

According to Berger, “It’s all about how you frame a deal to make it more enticing.”

In other words, Berger is claiming that $500 works better than 25% off because the number 500 is bigger than 25 — even though the discount amount is exactly the same! 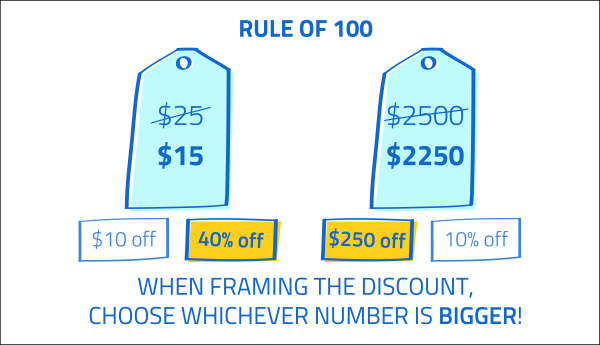 This idea that we irrationally respond to bigger numbers when it comes to pricing is supported by other pricing case studies. In these cases, customers bought more frequently:

Changing the Color of a Button Can Boost Conversions

In this rather famous case study for VegasSlotsOnline.com, they decided to experiment with a new CTA button color.

Originally, it was green. 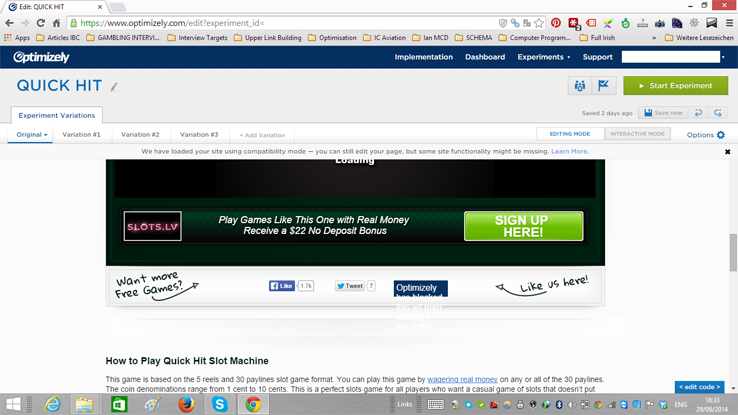 But then they changed it to yellow. 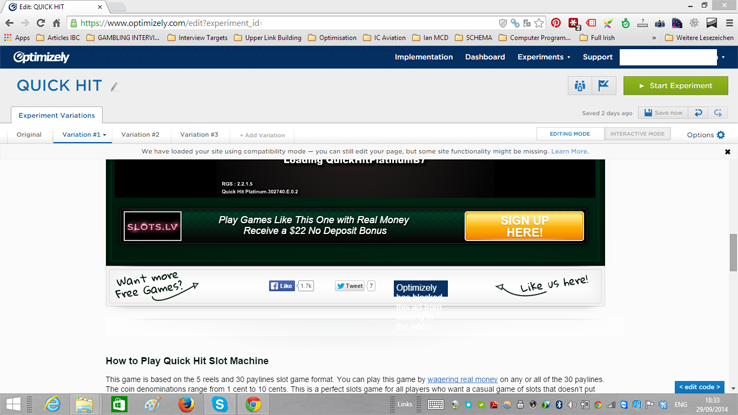 That small change led to a conversion spike of 187.4% with a confidence rating of 95%.

Why did conversions increase?

OptinMonster delves further into the psychology behind the most popular button colors:

Similarly, Crazy Egg shared interesting stats from Google and IBM on readability and font size. Here’s what they found:

There’s spacing to consider, too, as was the case with IT company Numara Software.

That’s huge! Makes me want to run a similar test on our site in the near future.

We’ll be sure to share the results in an upcoming newsletter when we do.

Here’s a study that Derek Halpern and I have cited often because it’s so compelling. It comes from Psychology Today and deals with the availability of retail options and how customers choose what to buy.

“Observations on visitor behavior on multiple eCommerce websites has shown that, when customers are given a large number of options to choose from, they have a much harder time making a decision than those who use the sites’ filtering tools to limit the number of possible choices.”

Apparently, a “paralysis in the decision-making process” can happen when multiple products are available. This triggers avoidance behavior, which means the customer will probably not buy from you.

Here’s the classic case study that supports this logic from The Art of Choosing by Sheena Iyengar.

In a grocery store, one sampling station offered six jam varieties and the second one offered 24. Of those people who could choose from 24 jams, 3% didn’t buy anything. Of those who could only choose from 6 jams, 30% bought.

When there are too many options, people worry they’ll make a bad decision. But when there are less to choose from, people are more likely to make a decision to buy.

This is something to consider when creating your packages and offerings.

List articles or listicles have been popular for a while now. This format is more skimmable.

But have you ever wondered why so many listicles are top 7 lists instead of top 8s?

It turns out, there’s a science behind it. Medium published an article that showed that “odd number length listicles…tend to have a higher audience score on average.”

Here’s the performance for several BuzzFeed listicles with odd-numbered titles. 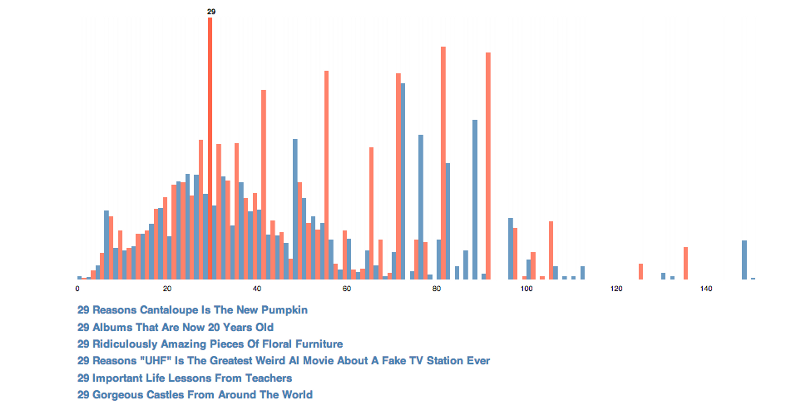 Medium says that top 29 lists perform the best of all. The BuzzFeed data certainly supports that.

What is 29? It’s a prime number. Indeed, the article goes on to say that listicles with prime numbers (and not just odd numbers) may draw more traffic.

Medium tried this with its own content. They found that, when looking at even-number listicles versus prime-number listicles, the p-value (or calculated probability) difference between the two was less than 5%. Yet, “the number 29 seemed to be consistently over-performing compared to other top odd numbers.”

Three Tips for Applying Persuasion Marketing to Your Sales Funnel

Now that you know how persuasion marketing can work for you, here’s how to apply it to your funnel.

A/B testing is the key to finding out what resonates best with your audience.

Sometimes changing the CTA button color doesn’t do as much as you’d think. I know that from my experience personally, we’ve only seen modest improvements from changing button colors, i.e., 5% here, 15% there.

You may have to make some other changes using the studies above to drive real, consistent results.

Check out my video on Sales Funnel Physics and the Law of Big Changes. It might help guide your thinking on this.

Tip #2: Understand the Concept of Framing

Framing is the concept of positioning an argument or situation to be more persuasive. You’ll see it a lot in politics, sales pitches, and us marketers use it all the time too.

Here’s a famous case study you may have heard of. A famous violinist performs one night at a music hall and is paid around $50K. Then, the next day, that same violinist plays in the Washington, D.C. subway.

No one notices him in the subway. There are thousands of people passing him by, but only a few give him money. Even still, it’s only a couple of dollars.

This is framing in a nutshell.

The frame is completely different in both situations, so people perceive the violinist differently. His art is seen as more acclaimed and valued in the Carnegie Hall context than in a subway.

You can apply this to a sales page as well.

For example, at the end of a webinar, the host will present two options that frame the choice for potential buyers:

“You can keep struggling or use my product to make tons of money / save time / etc.”

This is framing in action.

To learn more ethical persuasion marketing tactics, the last tip we can recommend is to subscribe to our blog.

Between our weekly in-depth blog posts and our daily Matt Hacks videos, we discuss plenty of tactics—including persuasion—for creating your sales funnel, getting more leads, and converting them into customers.

This is also a topic I have a personal interest in, as I’m reading several books on the topic now. You can expect more blog posts on the topic and related ideas in the near future.

Persuasion is everywhere, from commercials trying to sell you on a late-night meal to marketers encouraging you to try a product.

The power of persuasion is a delicate one, though. It must be used responsibly to build your company.

Otherwise, people will eventually see you as “scammy,” “hard selling,” and you’ll only taint your brand’s image.

Have you ever used persuasion marketing tactics?

What were your results?

Which of the above psychological studies resonated with you most? 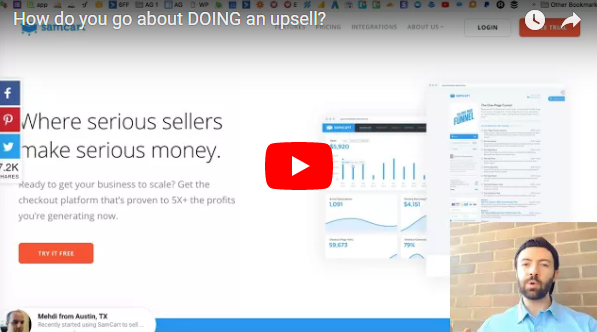 How Do You Go About DOING an Upsell?

Listen on the go by downloading the audio of today’s video here. In this video, I explain what an upsell is and...