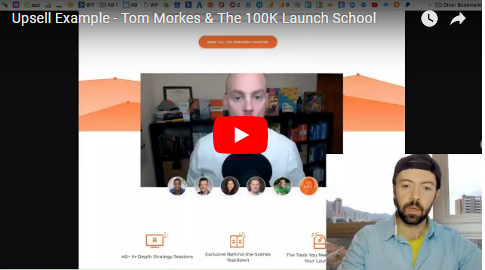 Hi everyone. My name is Matt Ackerson, and I’m the founder of AutoGrow.co. This is another episode of Matt Hacks, where in 10 minutes or less I give you one actionable tip you can take each day to grow your funnel and be more awesome at marketing.

In this video, I’m going to give you an example of a funnel that did an excellent job of upselling immediately after opt-in. It comes from Tom Morkes and the 100K Launch School. I’m going to walk you through it.

Tom effectively walked me through his funnel and upsold me immediately on a $100 purchase. So in the first step of the funnel, there has to be awareness and you have to drive traffic.

At the top of his funnel, the way that Tom created awareness was, he recruited the people that he actually featured as part of his offer and part of the case studies in his launch summit. In other words, this was where he was going to be teaching all about launch techniques. 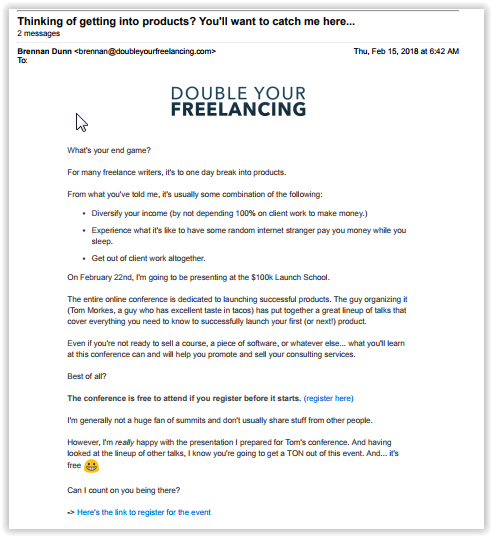 He recruited some really credible people, like Brennan Dunn at Double Your Freelancing. Brennan and I used to be in a mastermind group, and he’s someone who’s a serious marketer and a serious entrepreneur. So when Brennan recommends things, he’s serious, because this is actually the first affiliate offer I’ve ever seen Brennan send out.

So because Tom recruited Brennan and other credible affiliates, that really gave me pause and made me say, “Okay, I love learning from Brennan, he’s given me great tips in the past. Let me go see what this offer is all about.” So that was the first step.

The Second Step of the Funnel

In the second step, I’m brought to a landing page where the headline is immediately compelling. You can tell that Tom definitely put some time and thought into crafting this headline, which is his value proposition.

It’s clear in the small text that this is going to be a live workshop series, in other words, a virtual summit where the interviews would be aired, and it’s going to be an event. It was unclear from the copy whether it was going to be live or if it was pre-recorded.

Regardless, from just skimming the page and the fact that I’m coming to it through the frame of, “Okay, someone that I know and have followed is already credible and recommending this. I’m already coming and arriving on this page in a very positive context, where I’m likely to either take the offer or at least seriously consider it.”

I looked at some of the other names of the people who were involved, just backing up in terms of credibility, and it looks put together and well thought-out. The design is reinforcing the copy very effectively, and it looks like a legitimate offer.

So I went ahead and I clicked on the call-to-action to reserve my spot for free. One minor downside from a conversion perspective (as you may have learned if you’re a customer of our 6-Figure Sales Funnel course, where we do an interview with Giles Thomas, who says that, “when you have a call to action that is the same color as other elements on the page, that can actually take away, for lack of a better word, energy from that call to action button.”) is that because although people may recognize it as a button, it may be more likely to blend in because other colors on the page are exactly the same.

So from the conversion perspective, it’s possible that Tom is already testing this, but if I were in Tom’s shoes, I would have made that call-to-action button different. That’s just one thing I would have done differently.

The Third Step of the Funnel

Now, in the next step, there’s a follow-up page where the offer is. It says, “Thanks for opting in, but get the exact blueprint to drive a year’s worth of sales in a single month.” So he’s repeating that offer, which is curious because I thought I just opted in to get it.

Then if you continue to read and watch this short video, where Tom is actually on video, it’s his face, it’s him talking in just two minutes as he promises exactly what you’re going to get, which is basically instant access to everything that has already been recorded. 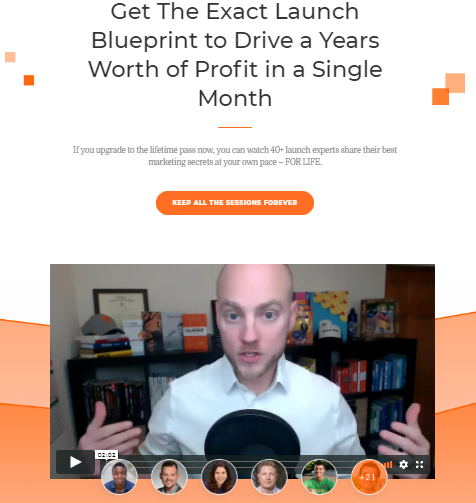 After reading a bit more, my question at this point was, “Okay, I don’t know what the price is yet, but I want to understand what exactly I am going to get.”

So I’m scrolling down, scrolling down and scrolling down, and I’m of seeing a well put-together page. I get to this point and it says $497, but it’s crossed out. So immediately the next price that I’m going to see is already the price anchored against that.

It’s the same exact thing in terms of price anchoring. You put out a number and the next number that you actually see is going to seem either lower or higher based on whether you’re going lower or higher.

Going back to Tom Morkes’ funnel, I click through to the checkout page and see the retail price, right at the top, again, reinforcing that pricing anchor of $497. Then I look down here at the total, it’s only $99 because there’s an early launch discount. So I said, “Okay, awesome.” There was this countdown going on with only six days, so there’s a little bit of urgency.

Then I go back, and now my question is, “Let me make sure I understand what exactly I’m getting.” I read through the copy and I understand better, “Okay, I’m getting access to this and that, and this item. Cool. Sounds great.”

The way I think about this is that I try to rationalize this, because again, we are not completely logical in the way we make decisions. That’s just not how marketing and persuasion works. So the rational side of me says, “I can use a couple of tips and if I get results, awesome. It’s more than paid for itself, it’s only $99.”

I’m not big on launches, I’m more of an evergreen type of person, where I want to set up a funnel. I think launches are very stressful since there’s so much detail, and if you get something wrong, the whole thing could blow up. I’m more of an incremental type of builder and marketer.

Regardless, I want to learn, so I click over to the page. I talk to a couple people about it and then I come back and I actually buy it. When I get to the second step in checkout, Tom gave me an upsell again for $13 for 40 transcriptions of all the PDFs. I think, “Okay, do I want this? Maybe I want to search through them. It’s only $13.” 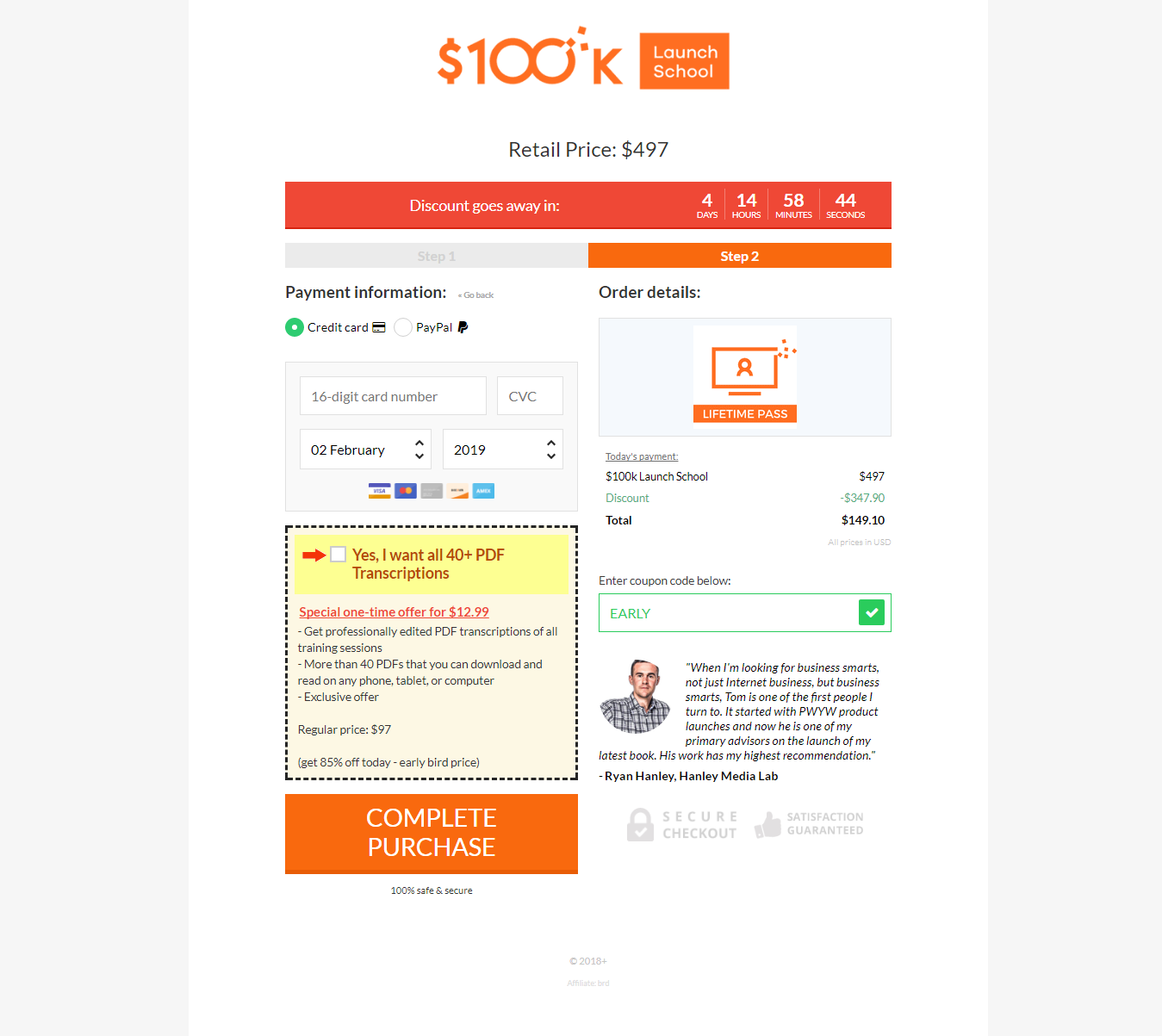 I decided to pass on that upsell, which is called an order bump, by the way. It’s an upsell that’s directly on the checkout page.

Then finally, I complete the checkout and I’m brought to a nice video of Tom smiling. For some reason, just that video there makes me happy. I’m excited and I’m ready to go.

So there you have it. It’s a step-by-step walkthrough of Tom Morkes’ 100K Launch funnel. This is also an example of an upsell and how you can do something similar and maybe get some inspiration for your business and your funnel.

Make sure you never miss another episode of Matt Hacks, where I deliver actionable examples, case studies and tips just like this one, by clicking on the red subscribe. You can also subscribe to our newsletter in the description right below here. If you’re watching this on our blog, there are multiple ways to subscribe. If you just want to get Matt Hacks, click on the Matt Hacks link directly in the navigation.

Until next time, my name is Matt Ack in the Matt hat, delivering your daily dose of Matt Hacks. Keep hustling and stay focused. In my next video, I’m going to show you our number one tool for one-click upsells and how it’s working for us, so stay tuned for that.

7 Best Examples of Upsells to Help You Maximize Your Sales

I’m a hard sell. It takes a lot to convince me to buy something. For example, I took a look...