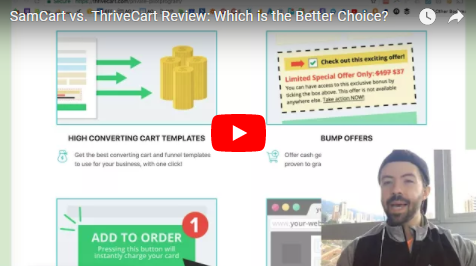 SamCart vs. ThriveCart Review: Which is the Better Choice?

Home » Blog » sales funnels » SamCart vs. ThriveCart Review: Which is the Better Choice?
By Matt Ackerson — Get free updates on new posts here

“This is the new Tesla of online marketing,” says one testimonial for ThriveCart. Well, we’ll see about that, because in today’s video, I’m going to share my reviews of ThriveCart and SamCart, pitting them against one another.

Hey. It’s Matt here, founder of AutoGrow.co, with another daily dose of Matt Hacks. In this video series, I give you actionable tips to help you be more awesome at marketing and otherwise accelerate your creativity and entrepreneurial spirit.

Back to SamCart and ThriveCart. These are the two most popular platforms if you’re in the market for a checkout tool. They offer some similar features, but there are really significant differences between the two of them. Let’s compare and contrast analytics, pricing, customer service, integrations and more.

The first thing that we’re going to look at is the dimension of analytics. Now, the thing I want to tell you guys is that I am a happy customer of SamCart. So this review is my opinion, and it may be biased because of that.

It’s also important you know I am not an affiliate, so I don’t stand to gain anything monetarily from recommending one or the other in terms of features or overall.

So first thing’s first. With SamCart, when you log into your dashboard, you’re basically going to see a layout like this where it’s giving you kind of like a Google Analytics high-level point of view of where your business is at. SamCart gives you some other high-level stats here as well. Although I’m very transparent with the business, there are some stats I’m not ready to share just yet. I want to save those for future videos.

These stats aren’t 100% accurate, since there will be the occasional bug you might run into with any software tool like SamCart.

So, for example, with monthly recurring revenue, this number has been consistently miscalculated. That’s mainly because the way we do it with trials, is that sometimes it leads to a purchase for some customers. SamCart is not currently set up to track that accurately.

Now, let’s switch over and look at ThriveCart. So right off the bat, I really don’t like how ThriveCart is trying to sell their products. It comes off as too “internet markety,” if you know what I mean, and it’s not very polished.

For example, just in terms of trying to give you guys an accurate review of what their stats dashboard actually looks like, the best I can do is to show you this picture from their explainer video that they have on this landing page. I’ll talk more about that in a minute. 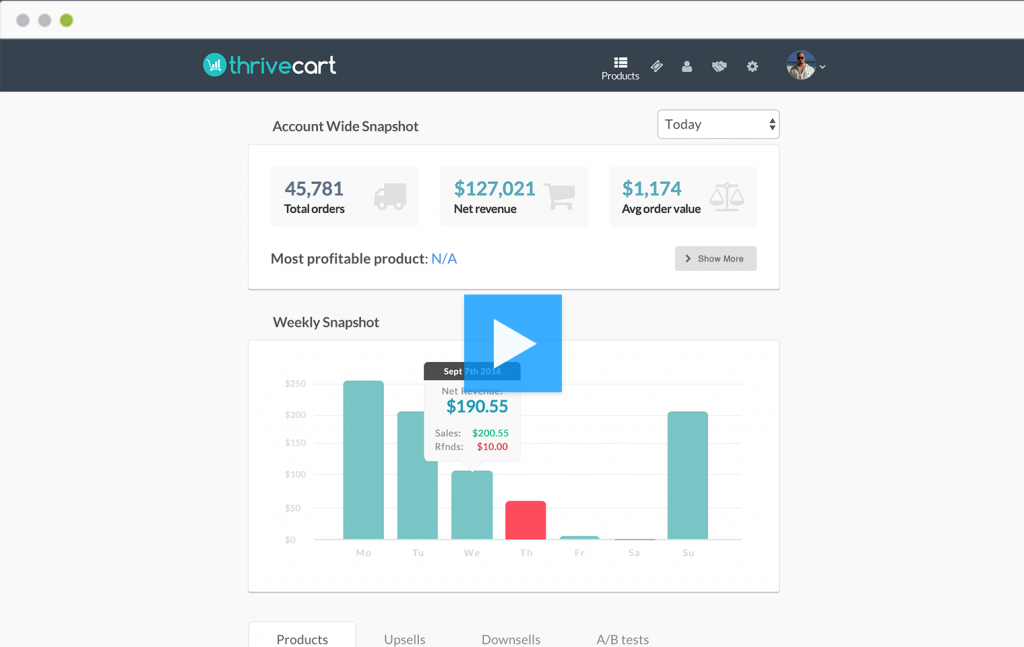 They do give you some analytics, it seems, and they may be comparable to SamCart. From what I have read and what I see though, it seems like it’s probably a bit more basic, but they don’t give a screenshot here.

In terms of integrations, both products are fairly comparable. They all integrate with the big players like MailChimp, ActiveCampaign and Infusionsoft, and they integrate with smaller email marketing software tools as well. This list actually may not be as comprehensive as all of the integrations they have today.

The list is likely to be longer for both of them because what I’ve found, at least since I signed up with SamCart, is that they’re always rolling out new features. The way they prioritize integrations, for example, is typically based on requests from customers. So it’s likely that both are fairly comparable depending on what email software you’re on. It’s likely that one or both will be a fit for you in that dimension.

In terms of features, both tools are again fairly comparable. They both have one-click upsells. They both allow you to have upsell funnels where you sell one product after another and then maybe downsell another product. They both allow order bumps.

Those are some of the biggest features that I was most excited about, and just the fact that I would never have to write a single line of code using either one of these solutions seemed great. However, based on my research before making this video, it seems that ThriveCart may have a slight, slight advantage in some smaller nuanced ways in the way they allow you to do things.

For instance, when someone buys something from you and they’re redirected to a thank-you page, ThriveCart would allow you to only make that page available so that the customer could come back, for example, and download something that you gave them post-purchase for a limited amount of time or forever.

ThriveCart has some more nuanced micro-features like that, that give you more control. In terms of being fully fleshed-out, ThriveCart may have some advantage in that dimension.

However, I haven’t really found a need for any of the features that I’ve seen that ThriveCart has that SamCart does not, in my experience.

In terms of pricing, this is where both products are very, very different. SamCart recently introduced a plan at $19 per month, which gives you some of the basic features. For AutoGrow, I have our company on the pro plan, which is at $99 per month.

Originally, I didn’t sign up, but they emailed me for a two-month free trial. I couldn’t resist because I was sick of trying to code this solution myself for our own checkout page. I tried it, loved it and I’ve stayed with it ever since. It definitely is paying for itself.

In terms of ThriveCart, according to one poll on their Facebook page, people responded saying the number one benefit they felt they got from ThriveCart was the price, which is a one-time price of about $600. Apparently, that gives you lifetime access. 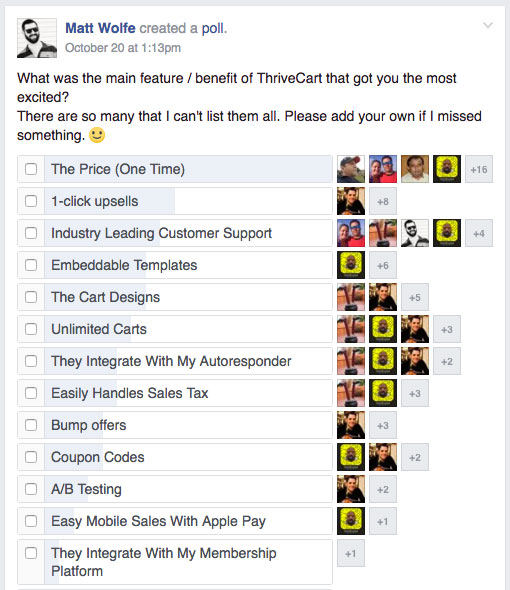 I don’t know, but there’s just something about it personally that rubs me the wrong way, because I don’t trust a software-as-a-service (SaaS), that doesn’t charge a monthly fee or an annual fee to deliver quality support when it’s actually needed.

The economics of it long-term just don’t make sense when you think about it, right? You pay $600, but two or three years from now, you need support. It’s actually not in their interest to continue to give you support, or continue to help you solve a problem if something comes up.

This goes back to just the way their product is even sold. If you go to ThriveCart’s website right now, you will see this page right here, which is not even selling the product. It’s just saying that the product is actually coming soon. So I assume they’re trying to do some sort of evergreen type of launch, and you know, maybe that works for them.

The branding, though — and this is just a superficial opinion — but the branding is just awful. It’s inconsistent compared to SamCart, which feels much more elegant.

I’ve noticed a direct correlation between the quality of a website design or the brand and the level of support I receive later on. The support that I’ve received as a SamCart customer has been spectacular. They’ve actually added a feature in response to a specific request I gave them. That’s been wonderful, and I’ve been very happy with the customer support at SamCart. I’m very skeptical of the customer support you would get with ThriveCart because of the one-time payment.

In the end, I have to recommend SamCart because, as a customer, I found their feature set is perfect. It’s not too much. It’s not too little.

They take feedback from customers very seriously, where if you can make an argument or show them an example of how you would want to use a new feature or tweak it, they’re actually very open to it and iterate it very rapidly.

Compared to ThriveCart in terms of the branding, the feature set and the price point, I’m actually more than happy to pay a little bit more for a higher-quality experience with SamCart. Again, the customer support was fantastic.

One Action to Take Right Now

That is the key action to walk away from this video with. If you’re in the market and you’re comparing ThriveCart versus SamCart, if you have the money, it’s going to be well worth it in the short and long term to go with SamCart, in my opinion.

To never miss another episode of one of these Matt Hack videos, be sure to subscribe on YouTube. You can also subscribe via email by clicking the link directly below the subscription. If you’re watching this on our website, be sure to sign up for our newsletter where we send short videos like this to your inbox every day with tips to make you more awesome at marketing.

In the next video, I’m going to talk about the one rookie copywriting mistake you might be making and not even know about. All right. So until next time, my name is Matt Ack in the Matt hat, delivering your daily dose of Matt Hacks. I’ll talk to you soon.

22 thoughts on “SamCart vs. ThriveCart Review: Which is the Better Choice?” 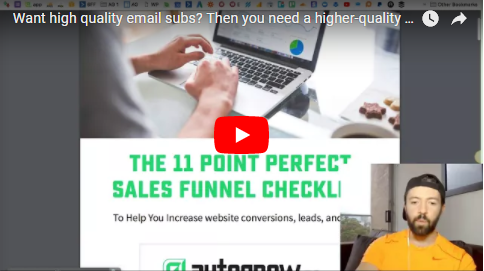 Listen on the go by downloading the audio of today’s video here. In today’s video, I offer an in-depth look into the...