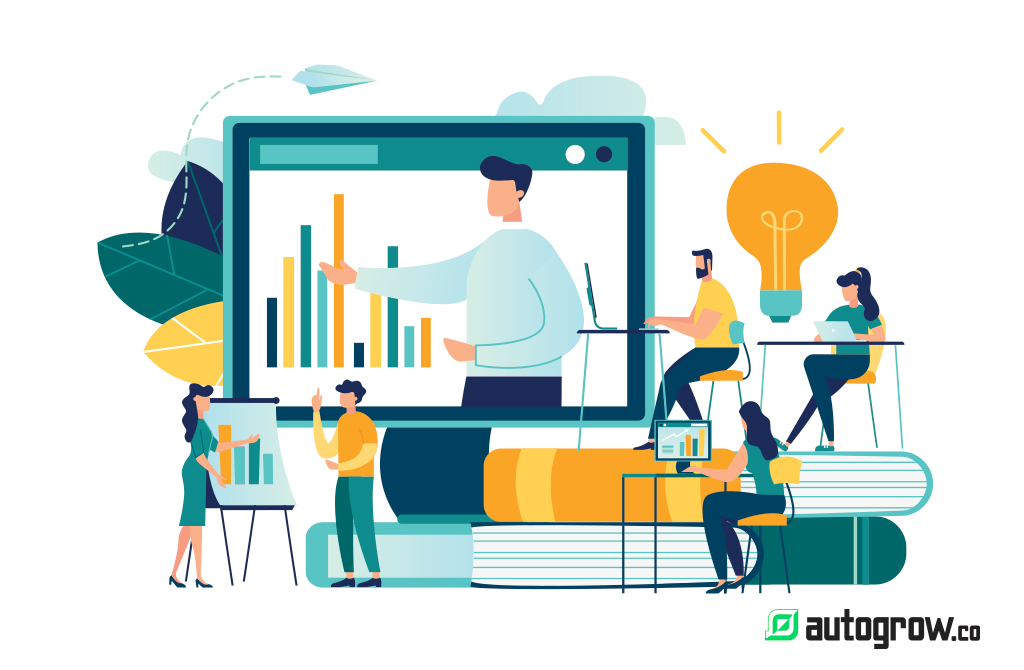 Do you ever wish you had X-ray vision to see into the minds of your audience?

Barring that, do you wish they would just tell you what they wanted so you could give it to them?

I know the feeling.

How do you get people to tell you anything that’s useful without having to put out an offer to test it? How can you optimize existing landing pages and offers?

I talked about the sales benefits of audience feedback in a recent Matt Hacks video, but it’s worth taking more time to talk about it here.

This is something the team and I have felt challenged by this for a while. To kick your marketing up a notch, it’s something you probably want to get better at too.

In this article, I will address the above questions and more. I’ll share with you more about AutoGrow’s own experience applying audience feedback the results we saw from it.

How to Get Feedback

AutoGrow has a survey funnel that invites customer feedback. We also publish weekly content, newsletters and  Matt Hacks that allow our audience to interact with us. This content normally ends with a question that invites readers to respond.

Our survey funnel, which we’ve discussed many times on this blog, include just one or two questions so people are encouraged to complete it. 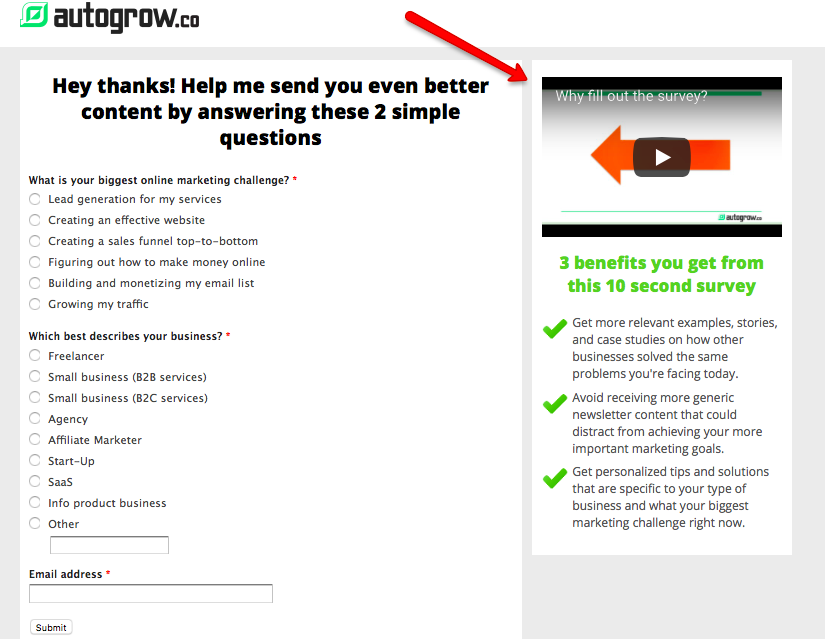 As you can see, the survey funnel is organized into a brief multiple-choice quiz. We also included a two-minute explainer video on why you should fill out the form, as well as a benefits list on the sidebar. These are all good elements to include when making your own survey funnel because they work to increase the conversion rate.

Our conversion rate after many thousands of conversions is about 40%. An interesting fact about this is that since we’ve tested the effect of having one form field instead of two, the conversion rate has gone down by a few percentage points (see stats graph below).

Another good idea that we’ve dabbled with is creating a custom text field that asks what the lead’s biggest challenge is.

This way the user gives more details in their own words and isn’t limited to a fixed set of choices.

Other options for collecting feedback include:

What to Do with The Feedback

Now that you have feedback, what do you do with it?

One option you have is adapting the language of your customers in your copy. This is what’s called the Visitor Vocab Technique, which was created by Giles Thomas.

Essentially you’re echoing back your customers’ thoughts and sentiments in their own words. This familiarity can boost conversion rates.

Here are the three steps Thomas says you should follow if you want to try the Visitor Vocab Technique yourself:

You can also write a FAQs section addressing questions people have asked when they visit your landing pages. This is another opportunity to use the Visitor Vocab Technique, as you can inject direct customer language into the questions.

Our Experience with Feedback

Part of the reason we here at AutoGrow are getting feedback so often is that we’re constantly putting out fresh content. We get more exposure to a larger audience on a daily basis.

When we were publishing Matt Hacks four times a week, we were also giving our audience more opportunities to share their opinions via feedback.

In all the content we publish, we speak in a very personal manner. We tell stories and write about our experiences. Sometimes I get on video as well, which people seem to really connect with.

That personal connection is a catalyst for growth. Our sales have increased as we get more frequent feedback. We have never had this many replies to our newsletter!

Take, for instance, an email we got from a customer of ours, Nick Conneff. Here’s his message in full:

This piece of feedback was extremely actionable. Nick was on the fence about becoming a customer because he wanted more information about a special offer we put out for our 6-Figure Sales Funnel training. Once he got it, he felt confident about investing the training.

In addition, from answering Nick’s question we decided to standardize the practice of adding a short video walk-thru to future sales pages.

For example, with our newly launched Sales Funnel Diagram Pack, we gave viewers a detailed walk-thru so they know exactly what they were buying and the benefits.

So far, it’s been an instant hit with sales flowing in from day one.

When to Seek It Out

Feedback may come in at a trickle at first (like it did for us), but it will eventually grow to a flood.

Until then, here are the best times to tap into your audience for feedback:

If you have these specific concerns or others, be as direct as possible in your questions to your audience. Ask what kind of changes or advice they’d recommend. Test these changes to see which gets the better results.

Examples of Using Feedback in Action

Above, we mentioned how Moses Kagan significantly increased his conversion rate by implementing the Visitor Vocab Technique. He’s not the only one to benefit from using audience feedback for more sales or conversions.

Here are three other case studies proving the value of this feedback.

Real estate institution First American SMS has been in business since 1974, and they’ve had no problem keeping up with today’s growing real estate demands. They often rely on automation to cover some jobs.

Customer feedback plays a large role in their day-to-day operations, especially during case closings. That said, First American SMS hadn’t quite gotten around to automating these closings, which was wasting valuable time.

First, the company had to obtain the customer’s email address, case number, and information about the representative that handled the case. Then they’d have to load this information up and transfer it to a feedback survey.

QuestionPro, a survey company, worked with First American SMS. Together, they implemented automated feedback surveys. Everything would be digitized through QuestionPro’s system.

By doing this, the feedback survey distribution process had a 50% increase in productivity.

Vehicle manufacturer General Motors is one of the most well-known American brands. Always growing and expanding, they developed a Voice of Customer Program in 2014. They relied on Feedback Ferret, a text analysis company, for guidance with the new program.

Before working with Feedback Ferret, GM confesses that its surveys were a little too long. The company was getting feedback, but it wasn’t as high-quality as it could have been. They were also taking too long to get back to their customers because of the sheer amount of feedback to sift through.

Under Feedback Ferret’s guidance, GM’s new customer feedback method involved reducing the number of questions on survey data. This data was gathered for the GMC, Buick, Cadillac, and Chevrolet vehicles.

Now GM gets Hot Alerts Feedback when certain concerns are urgent. This has lessened the amount of time that customers have to wait for a customer service rep to get back to them. Today it’s five days, when before it was roughly 30 days.

With such a sheer number of replies, ManpowerGroup spent too much time going through them all. Once they hired Thematic and got their insights, they streamlined their feedback process so they could go through replies faster. By doing so, they were able to determine how they could better serve their customers faster. This led, in turn, led to a revenue increase.

If you want a chance for your voice to be heard, audience feedback is a great opportunity. Back when we first implemented our 6-Figure Sales Funnel training course, we were getting just a trickle of feedback.

Still, we appreciate the people who took the time to point out typos or ask us about rearranging elements on the page (like moving up our testimonials). We implemented their advice, and our product was better for it.

Have you ever asked for audience feedback before?

Do you think you’ll reach out to your audience now after reading this article?

Have you ever worried you’re sending emails too frequently? Or that you’re going to burn out your email list? It's...