The Unexpected Benefit to STOPPING (5% of traffic = 66% of sales)

Join us on the journey to predictable growth. Each week we tackle a different level of your funnel, from traffic and email list growth to sales conversions and upsells. Sign up for our newsletter here to get the 10-minute #MattHacks videos.

Ever so often, we come across a problem in business that forces us to step back and reevaluate. In the case of these Matt Hack videos, I was doing them four times per week in addition to our articles that we come out with on Tuesdays.

What Happened to the Matt Hacks?

A couple of weeks back, I decided to just flat out stop doing them. Why? I was starting to hate the process.

It’s not that I didn’t like making the content. It’s that it felt robotic and forced after a while. One of the core values I’m building AutoGrow on is self-improvement. The others are creativity and enjoyment. I think that enjoyment for me and for my team is really important. If you’re doing work you hate for a long enough period, that work is not going to be sustainable.

Passion is everything. While I don’t necessarily believe that it’s actually a core ingredient for success, I do believe that enjoyment is an important ingredient in your work for it to be sustainable. I believe you can succeed in the short-term, even if you hate the work that you’re doing. Yet over the long-term, I think that lack of enjoyment will ultimately bleed into the way you lead your company, your team, and the work you actually put out and produce.

That being said, a couple weeks ago I decided that I needed to step back and reevaluate how I’m doing these videos because I wasn’t enjoying the process. I felt like the quality of each video could be much higher. Plus, I originally started making the videos as an experimental effort to see if it would grow our traffic, and it did! But, when I measured the results, I had to pause and reevaluate. This was kind of the final nail in the coffin…

When I looked at the amount of traffic that was coming in, it represented out about 32,000 visits coming to our site, only about 5% or about 1,500 visits to the site on a monthly basis. I then wondered why I was taking the time and effort to do this if I wasn’t enjoying it and we weren’t getting tons of extra traffic.

I decided to put the Matt Hacks on pause.

In the couple of weeks that have passed, I’ve now come to see what the value of those videos was to the business, which is really quite surprising. I’ll share an interesting stat with you in a second. I want to give you, as a member of our audience, the maximum amount of value.

Here’s what I came up with. I decided on quality over quantity. Secondly, I figured let’s have some sort of a minimum, where we come out with videos at least once per week. What I’ve found from looking at the data was that from one week to the next, our sales dropped 66% when we stopped making those videos.

So even though only 5% of our total traffic was being generated from these videos that we were sending to our email list, the level of engagement and the level of relationship with you, our audience, was that much higher. People were willing to invest in our training products like the funnel diagrams, the Sales Funnel Blueprint, the 6-Figure Sales Funnel training, and more.

This Entrepreneur article supports sending more emails for better engagement. “A better way to look at engagement is to focus on customers, not campaigns,” says the article. “If you can boost the percentage of your customers who have ever opened or clicked on an email, you will most likely boost your revenue as well — and if you email your list more often, that’s exactly what will happen.”

From one week to the next, we made about $1,600. When we stopped doing the videos the next week, sales dropped down to something like $550. That’s more than a 66% drop, or two-thirds, which is huge. 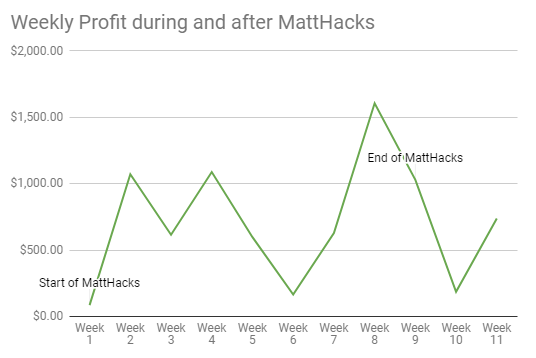 You wouldn’t expect that, but I suppose this is an example of one of those things where big doors swing on small hinges. The majority of our sales were coming from a small amount of our traffic.

Our sales hit makes sense when you look at the data. WordStream’s stats from 2017 on video marketing found that by making videos, marketers can see a revenue spike 49% sooner than those who don’t make videos. That gives me confidence we can reclaim our previous sales numbers.

As for our traffic, although the Matt Hacks themselves weren’t accounting for much traffic to our site, the daily email newsletters may have been. This article from the email marketing company Zettasphere states that weekly, marketers should send about six emails. That’s about how many we were sending back when we’re doing the Matt Hacks.

One Action to Take Right Now

What I want you to take away from this video is this. Whether it’s related to your traffic or another part of your funnel, you might want to step back and consider putting it on pause or even just stop doing it altogether. When you do that, it will help you to get some perspective on whether it’s actually working. That may give you some interesting insights when you step back, evaluate, take the time to think about it objectively and take yourself out of the process. You may find that it’s generating the results in a different way you wouldn’t expect.

If you enjoyed this video, leave a comment below. Let me know about one thing that you perhaps identified with. I look forward to hearing from you and seeing you in the next Matt Hacks videos, which are coming back now! So until next time, my name is Matt Ack in the Matt hat, delivering your daily dose of Matt Hacks.

How to Use Audience Feedback to Grow Your Sales

Do you ever wish you had X-ray vision to see into the minds of your audience? Barring that, do you...