Rank Higher in Google with One Small Change to Your Server

Join us on the journey to predictable growth. Each week we tackle a different level of your funnel, from traffic and email list growth to sales conversions and upsells. Sign up for our newsletter here for daily 5-minute #MattHacks videos.

Hello everyone and welcome to another five-minute Matt Hack, where I tell you it’s going to be five minutes and it turns out to be about nine minutes. I’m working on that 🙂

In today’s tip, I want to talk about how to speed up your website so you can get more traffic and page views. You can also retain people longer, and since your website is loading faster, Google is going to smile its good graces upon you and rank you higher in search results.

Choosing a Server with a Solid-State Hard Drive

Let’s look at one way you can increase the speed of your website right now that might be a lot easier than you think.

This is one of those cases where I’m just going to be totally transparent with you. I’m not exactly proud to show you these results, but hey, it’s a work in progress. You’ve got to start somewhere.

We’ve been on the same server since I started the AutoGrow business. We host with a company called the RimuHosting. They sell virtual private servers, so they’re basically like a GoDaddy but, you know, a little more advanced. They allow you more control over your server as well.

RimuHosting has great technical support if you’re looking to move to another host. Their support is just awesome.

So, anyway, back to what I wanted to show you. We were on the same server, for the entire first seven years that I started the business, back when we were still called Petovera.

Last week, we moved to a server with a solid-state hard drive. In case you’re not familiar with that term, you may remember having an old laptop or an old desktop computer, like one of the towers those big clunky monitors used to sit on. Maybe you remember when you would try to load up a program that took a lot of resources from the computer. You may have heard things moving and clicking, and the fan would accelerate to keep all the hardware cool.

Basically, that was evidence of there being a hard drive where there were moving parts. There were disks spinning around, kind of like a record player, and it was accessing the data on the disk.

Well, with a solid-state hard drive, which is what a lot of modern computers and now servers are being built with, it literally means what it says. It’s solid in the sense that there are no moving parts. It’s reading it off of a memory disk.

For that reason, you might notice solid-state hard drives are a lot quieter. You don’t really hear that tick, tick, tick you used to hear. I’m sure everyone who had computers in the ’90s or grew up with computers in the 2000s, knows exactly what I’m talking about.

Anyway, we moved over to this server with a solid-state hard drive, and I made sure to take screenshots using Pingdom and a couple of other tools so I could show you guys the results before and after. 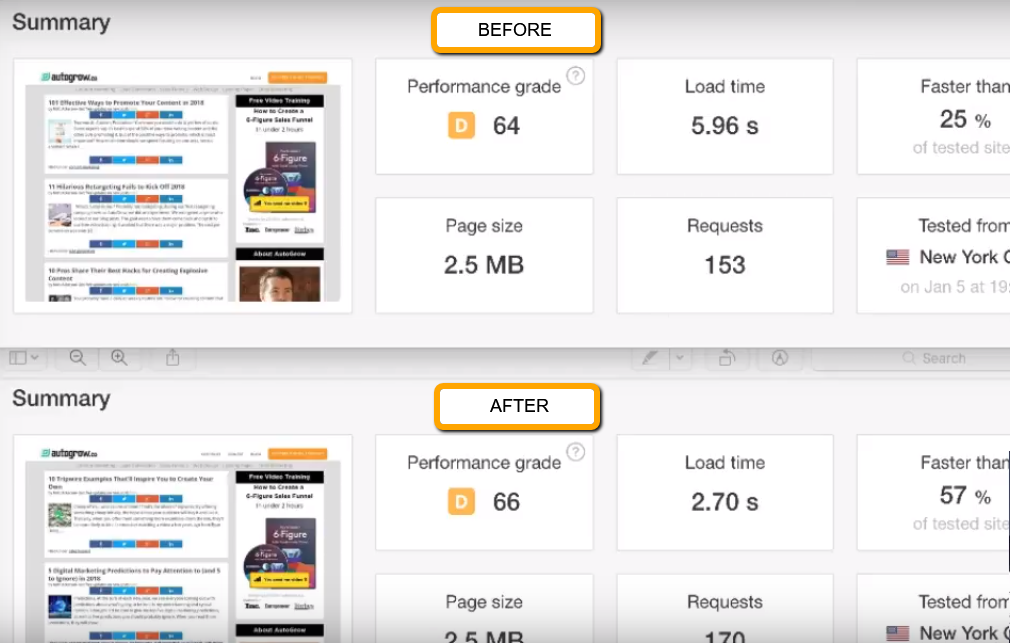 I would call it a marginal improvement. I think it’s a pretty good start. I actually wasn’t sure what to expect, but I tested the website from the same server, so it loaded from the same location.

Originally, we had an overall performance grade of 64, so that’s what I’m kind of not so proud of. But hey, it’s a work in progress. We went up too, from a 64 through 66. That’s not so impressive.

What is impressive is that the overall load time for the website on this particular page, our blog roll page, took about six seconds to load, and it dropped by more than half to 2.7 seconds. I tested this multiple times and kind of averaged it out, and this is what it came out to be.

In addition, Pingdom previously said that we were faster than just 25% of websites. We were pretty low on the totem pole. Well now, it says we’re faster than a majority of websites at 57%. For just a couple hours of work with the server hosting company, that’s not bad. I’m actually kind of pleased with this.

I also tested this on other web pages. Let me see if I can show you what those are. I’ll show you Google PageSpeed as well. 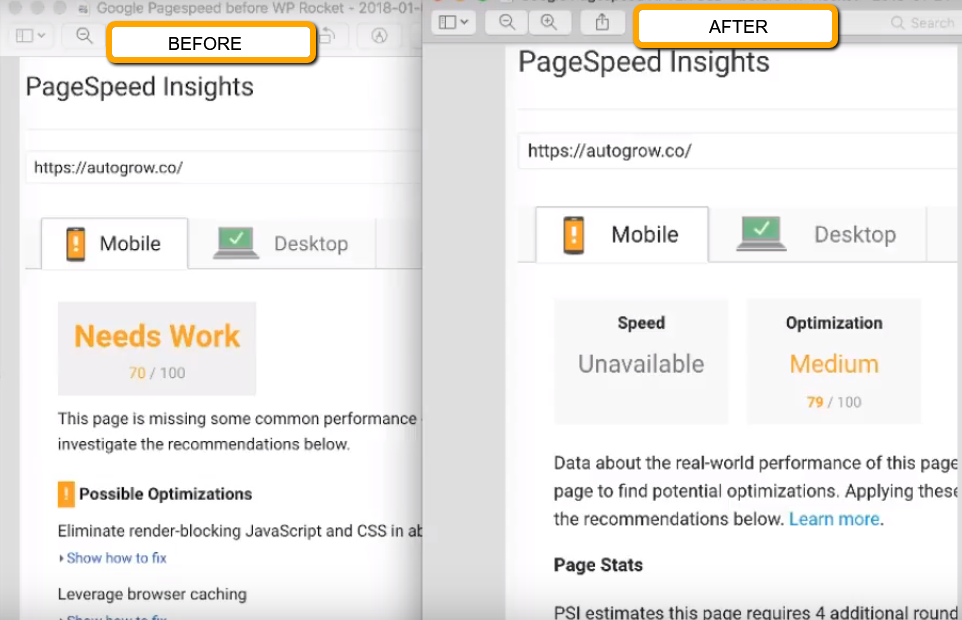 So this is our homepage before, and this is it after using Google PageSpeed. We had a 79 on mobile. And where’s Google PageSpeed? Homepage, mobile, okay. We went up by nine points on their mobile rating, just to show you another data point here. We also went 70 to a 79. So again not bad, especially not for a couple hours of work and coordinating with the staff over at our hosting company.

If you’re looking for a quick way to improve the user experience, increase page views and your Google ranking, (which will get you more traffic in the long term), you should do one of the simple things that Google actually recommends on their PageSpeed Insights. Pingdom, which was the other first set of screenshots I showed you, recommends this as well.

Move to a server with a solid-state drive. You can find one that is either the same price or not much more expensive than what we use, and this will only take an hour or two of your time.

The only thing to shy away from—because it is a little technical and that’s why I held off on it for a while—if you move over to a new server, you may have to update your DNS settings. And that’s just a fancy way of saying, what do you tell the public record when someone types in your web address? You know, on example.com, where do you tell the record to point to, this server or that server? Here’s more information on updating your DNS settings if you’re interested in learning more about this.

Don’t be intimidated by the technical aspects of it. It only takes an hour or two of your time to get faster website speed. If you want to take action on it, contact your hosting company. It’s really that simple.

If you’re a new business, start with a solid-state hosting instead of trying other servers first. That will save you time and money.

Until next time, keep hustling, stay focused and if you want more tips like this, join our newsletter. There’s a link right below. Just pop in your email and I will see you tomorrow.

Get 50% More People to Click to Your Site (Hint: Email Subject Lines)

Welcome to Video 2 in the Matt Hacks video series. This week, once again, our focus is on traffic. So...