Hi, Matt from AutoGrow.co here. Welcome to another edition of Matt Hacks, where each week we’re tackling a different focus or level in your funnel.

Effective email list-building is our focus this week, and then sales and upsells at the bottom of your funnel. In these 10-minute videos, I give you actionable tips and simplify things as much as possible, so that you can be more awesome at marketing and accelerate your creativity and entrepreneurial spirit.

In this video, we’re going to talk about the obvious mistake in your email funnel that could be costing you. These have been costing us potentially thousands, if not tens of thousands, of dollars as well.

Have you ever realized the obvious fact that it’s impossible for more people to click your emails than open them? Here’s a quick screen share to illustrate this point.

A Glimpse Into AutoGrow’s Email Click and Open Rates

As you can see, in this recent email we sent out, there was about a 2.5% click rate and a 29% open rate. This is pretty good as far as industry averages go. 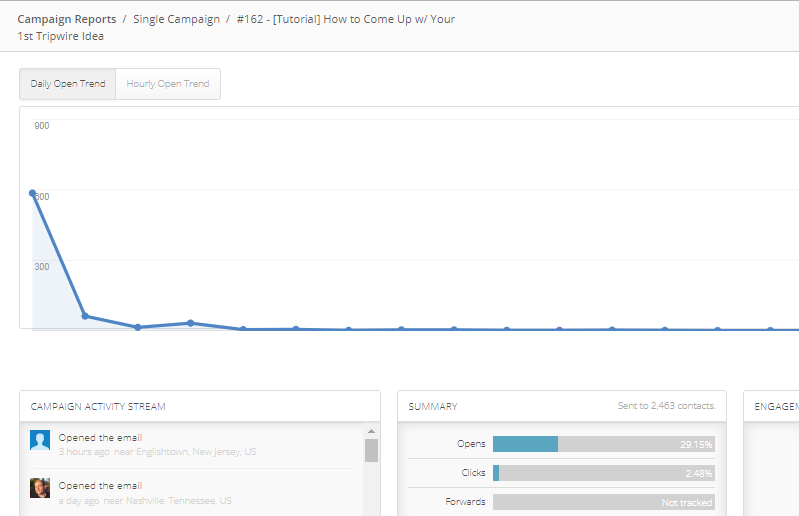 So you can see comparing the clicks to the opens, about 12 times more people opened it compared to the number who actually clicked through. Think about that for a minute. It’s an obvious fact that that’s impossible. You may not have thought about what it actually means.

So if you’re trying to get 100% of people to read your email, that’s not realistic. If you have the philosophy that I did for a while, which was, “Hey the people who are most engaged are going to click through,” that’s the example that we’ve been using. “The people who are engaged, they’ll click through. They’ll read the blog post on the webpage.”

Well, potentially the data says you’re missing out, and we’ve been missing out on potentially hundreds of leads and sales because after sending hundreds of thousands of emails in the last two years, from our data, it says that between five to 15 times more people will open an email compared to the number who will actually end up clicking it.

If you’re focusing on targeting just those who click, as we did for a while, you might be missing up to 15 times more people who may otherwise be interested in learning from you or buying from you. Think about that, 15 times. Now, that doesn’t mean that your sales would be 15 times higher if you focused on those people.

Let’s break it down a little further. If we actually targeted the people who opened our messages and not just those who were willing to click — in other words, we weren’t just trying to drive people to open the message, click through to the site, read the content that we were putting out, or the offer, or the landing page — if we went after the people where they were at in their inbox, and we went after those people who weren’t just willing to click, but willing to open our emails, our sales perhaps could be two times higher per year.

So this means for AutoGrow, we would have made an additional $130,000 in revenue last year. How would that look for your business? Well, I’m sure wherever you’re at, whatever the number, you’d surely agree that two times more sales is a lot better than whatever you had, which was one-times sales.

What’s the solution to this problem? Well, first of all, you don’t want to make the mistake we did, no matter where you’re at. Instead, you want to employ what I call the Messages to the Edges Strategy.

Understanding the Messages to the Edges Strategy

Messages to the Edges kind of rhymes, which makes it a little easier to remember it.

The Messages to the Edges Strategy is that you want to meet customers where they are at in terms of getting your message out there and communicating with them.

For example, think of your business like a wide, tall cylinder. Just imagine you’re in the desert and there’s just a giant cylinder of water. These are just metaphors, and they represent your business.

Your customers are walking around and they occasionally will look up at the tall cylinder, but they’re busy living their lives down there on the ground doing whatever. They will only see what content or signs are positioned at the edges of that cylinder that they’re looking up at.

So here’s a practical example of how to apply this, and how we’re actually going to be applying it to our own emails going forward. Instead of trying to drive people to the content on your website, we’re going to bring the content to them by putting it in the email autoresponder that they’ve opted into.

Now, the exception to this rule for us is when we have a new blog post. With our blog posts, we want to drive people to the website so that they can read it, because often our blog posts are too long to fit in a single email.

In addition, this provides a better user experience. If part of our goal is to get people to share it, which it is, then we know that our email subscribers are significantly more likely to share it.

One Action to Take

So here’s the one action to take: look at the most popular mail automation you are sending to subscribers right now. Many businesses may just have one automation and that’s fine, but look at that with a critical eye. Instead of trying to drive clicks, change the email text so that when people open it, they’re seeing the valuable message right there in their email autoresponder first.

Then, towards the end of that content, whether it’s a sales message or it’s educational content, provide a link to buy or contact you in a future email.

This works because of the Principle of Reciprocity, which is from the book by Robert Cialdini called Influence. The principle states that there’s a “human need and tendency to want to give something back when something is received. This need is strongest when the gift is given without expectation of return.”

This works because you show your audience that you’re focusing on giving them something first before you ask to receive back, which builds trust and increases the end overall conversion rate.

So once again, the one action to walk away from this video and execute on is go look at your most popular email autoresponder and evaluate and ask yourself the question honestly, are you giving your subscribers what they need to be successful directly in that email? If you’re not, if you’re just trying to drive clicks over to your website, then you’re missing out on a golden opportunity. So you want to reword and rework the text in those emails.

That’s it for today. To never miss another Matt Hack, make sure to hit the red subscribe button directly below this video on YouTube.

There’s also the option to opt in via email to make sure you get notifications, because YouTube doesn’t always send the notifications. We’re coming out with these Matt Hacks four times per week. We’re sharing the journey with you. We’re sharing what we’re learning as we’re growing, and we’re being totally transparent.

It’s a lot of fun and I’m also happy to answer your questions, so put your questions, if any, in the comments. If you like this video, then give it a like and share it on social media. If you’re watching this on our blog, you can also subscribe to our newsletter directly below this video.

So tune in next time when we’re going to give you a really interesting case study about email widths. Now, that might sound like a basic boring topic, but it’s actually not. You’ll notice if you’re subscribed to more than a few newsletters that the widths that different marketers use really varies.

In the next video, I’m going to answer to the question of which is better: Is it better to have a narrow width email design or a wider width, and why? Which is going to drive more clicks for you when you have a call to action in your email? Once again, my name is Matt Ack in the Matt hat, delivering your daily dose of Matt Hacks. Keep hustling, stay focused and I’ll see you soon. 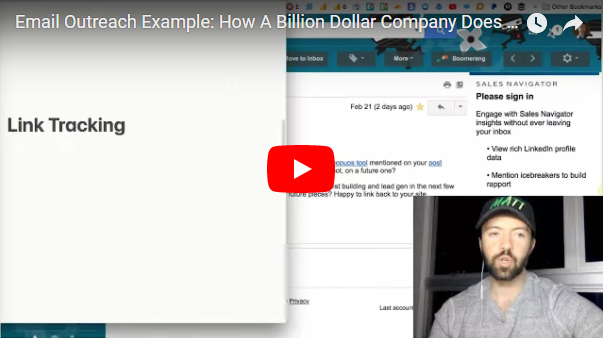 Listen on the go by downloading the audio of today’s video here. Matt breaks down the link-building email he got from HubSpot...