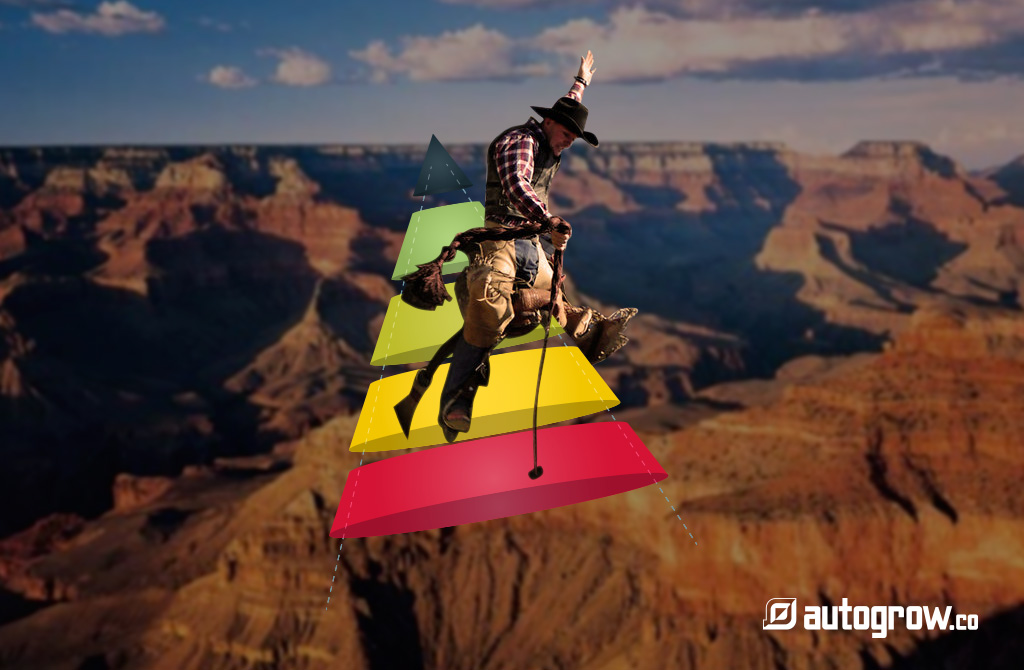 Some marketers just seem to have all the magic.

They can send an email and poof!

Then it’s like a slow-motion party with pools, champagne, and dollar bills to make it rain!

Meanwhile, you’re left scratching your head, thinking, “Hey wait! I’m doing everything right. I’m using all the best practices. I wrote an email autoresponder series, I rolled out a new landing page…but almost no one responds! What gives?”

This could be the main reason people don’t respond to your follow-up email offers. It could be why they don’t convert into leads and sales on your landing page.

In this article, I’ll teach you what that key ingredient is and how to stir it into your marketing funnel mix.

So, what is the key ingredient? Hint: it is probably the very reason you’re probably reading this right now.

The answer may sound simple. But I’ll explain…

The key ingredient is: be interesting and be entertaining.

I’ll put it another way: whatever you do, don’t be boring!

Think about it. You started reading this article because the title caught your eye. If it didn’t, you wouldn’t be here.

I’m going to explain why I chose that as the title, and break down the reasons people might be turned off by your current marketing message.

Then I’m going to show you some examples of other marketers who are very successful. This is in no small part because they know this one simple truth…

Finally, I’ll wrap up with teaching you how to fix your marketing message so you can keep prospects hooked.

This Is Why Almost Everyone Ignores Your Marketing 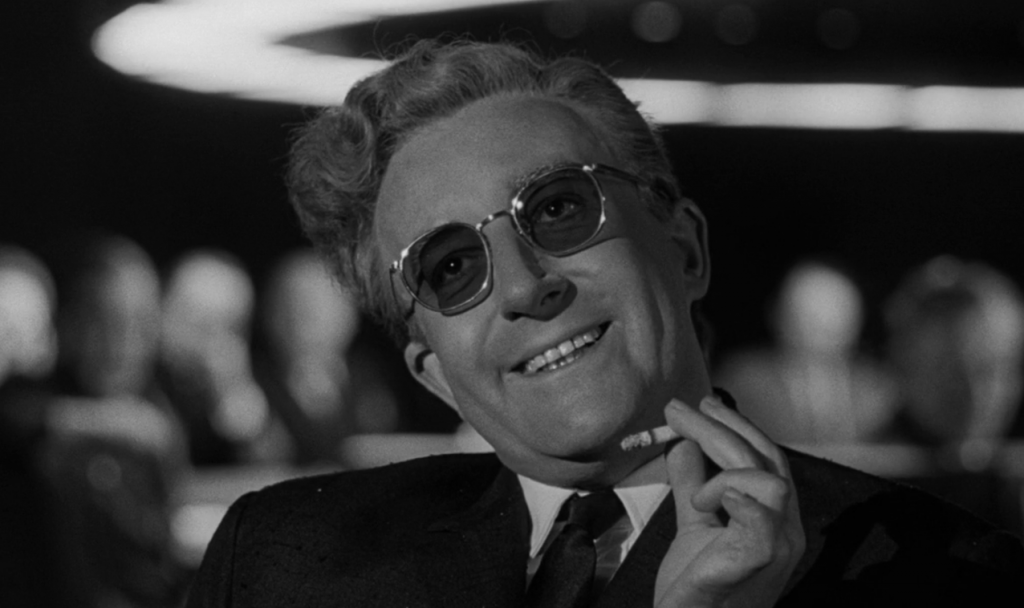 Who or what is Dr. StrangeFunnel? Why is it so important to learn to “love the sale”?

Stanley Kubrick is one of the greatest directors in the history of cinema. His legacy is eclectic, having directed everything from 2001: A Space Odyssey to Eyes Wide Shut.

One of his most underrated works is Dr. Strangelove or: How I Learned to Stop Worrying and Love the Bomb. This is a dark comedy about the nuclear standoff between the world powers during the Cold War.

It sounds serious, but it’s quite funny. Some of Kubrick’s characters have stayed with us over generations and become part of pop culture. Take the cowboy riding the bomb into oblivion, for example. Then there’s the famous line, “You can’t fight in here! This is the war room!”

The point is, this movie has endured because it was interesting, and not just in the title, but in the content. Dr. Strangelove presents a serious topic—the threat of nuclear war—in a lighthearted way.

This movie, like your messages should be, is entertaining.

So why does almost everyone ignore your marketing?

I mentioned it before and I’ll say it again: You could be boring your prospects.

No one wants to hear they’re boring.

But instead of taking this personally, focus on how it applies to your marketing message.

If people are ignoring what you’re saying, it’s not necessarily because they don’t need your service. Instead, people could be ignoring you simply because they are not connecting with your message.

The iPad could have been a really boring product. “Hey it’s a computer that’s slim and has some games on it.”

But Steve Jobs and the Apple team created a marketing “frame” around it that made it interesting.

Perhaps one of the most common causes of marketing that bores, it that there’s not enough humanity or personality in what you’re saying.

You may not be speaking in the first-person, for instance.

Even if you are speaking in the first-person, you might not hooking the customer in and connecting with them. We’re going to give you some helpful tips for making a lasting bond with your audience.

Another possible reason prospects overlook you and your emails? People are busy. They see a lot of marketing messages in their daily lives, from ads to social media to cold calls. It’s nonstop.

The bar is constantly being raised. The way to break through is to increase the quality of your message. That will give you a great long-term competitive advantage.

Let’s look at some examples of what I mean…

Five Examples of Seasoned Marketers Who Keep You Hooked

Being interesting is the best way to break through the wall of noise, as these five examples prove. These marketers know how to keep audiences hooked on their every word.

Consider modeling some of their tactics.

This post on Derek Halpern’s Social Triggers draws you in immediately.

The headline warns, “Be Careful Who You Listen to on the Internet.” You want to know what cautionary tales you’ll read in the article.

As if the headline wasn’t enough, Derek included a creative illustration. They are large, cartoonish illustrations arranged in a comic panel to drive his points home.

You only see one part of the cartoon in his email. You have to click-thru to reveal the whole panel. 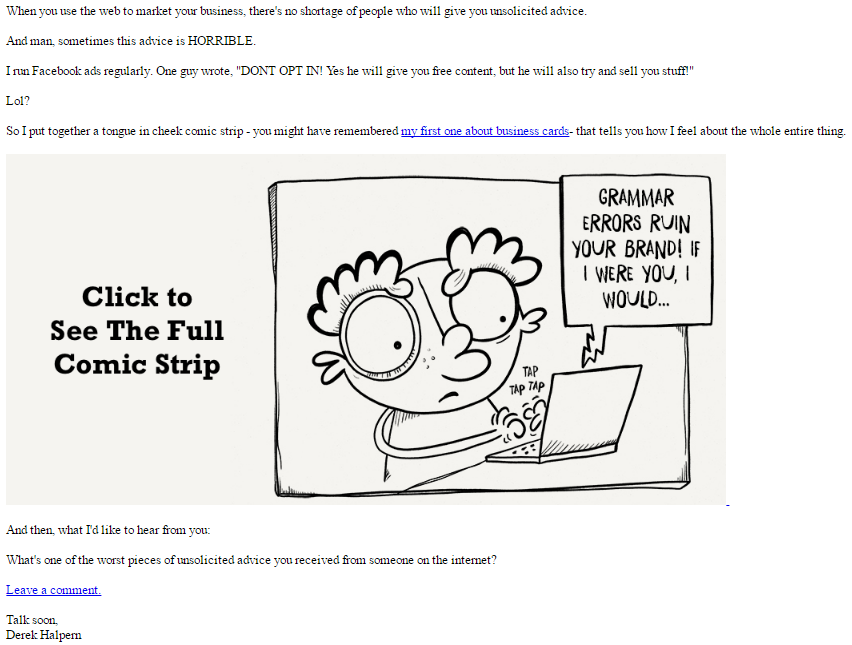 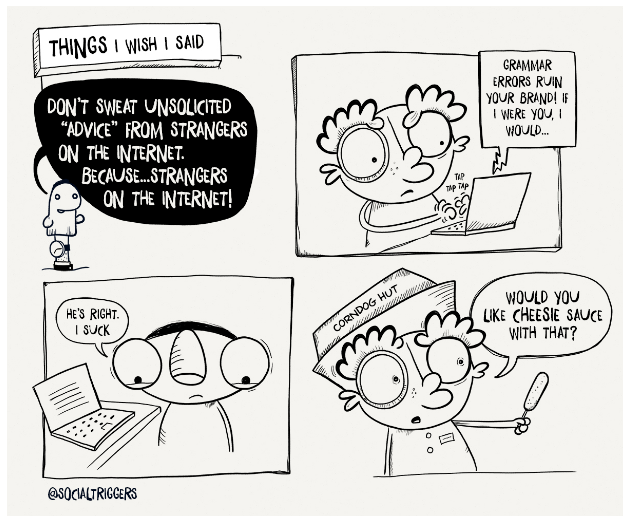 Derek knows how to pull people in and keep them reading.

While Frank Kern’s post is a video instead of a blog, he still wrote quite a lengthy caption.

It’s a wild introduction to what he’s going to show you in the video. He starts by asking his followers if they’ve ever made a cold call in a strip club at lunch hour on a Monday. 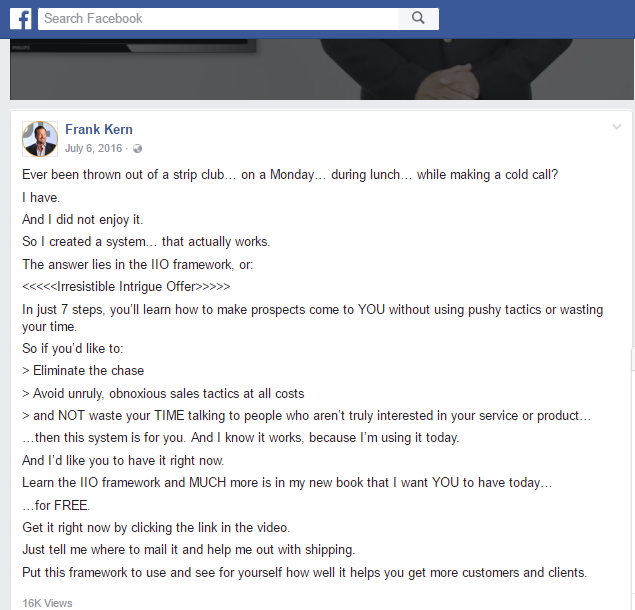 Who wouldn’t want to continue reading after that kind of setup?

We typically only reserve saying “I love you” for our closest friends and loved ones. Well, CB Insights didn’t get the memo. For a while, every newsletter they sent to their customers ended with a proclamation of love.

CB Insights brought in 240,000 subscribers through that tactic as highlighted on Content Marketing Institute. Not all loved it though, pardon my obvious pun. But CB Insights responded with a clever email titled “A note from that creepy guy.” 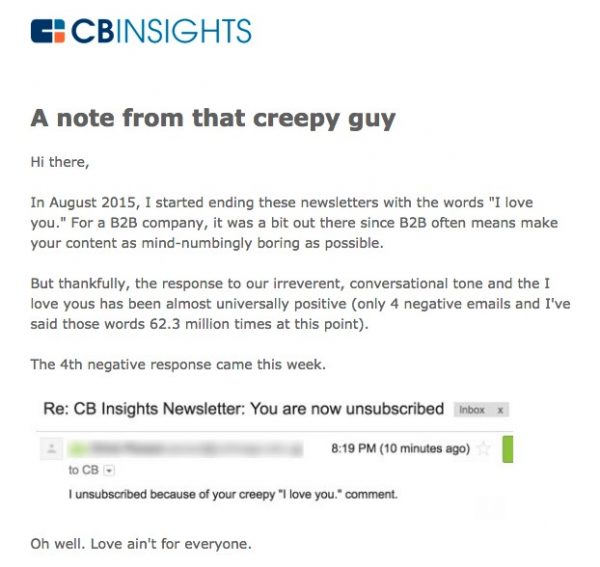 Even if you were already weirded-out by CB Insights’ flaunting of love, you can’t help but open that email.

Moz is a trusted marketing resource for all things SEO. Even they have to keep their customers interested in their content, though. That was the impetus for Whiteboard Fridays.

Every Friday, Moz writers would run through an SEO concept with whiteboards. There would be high-res images and a video if you didn’t have time to read the blog post in full. 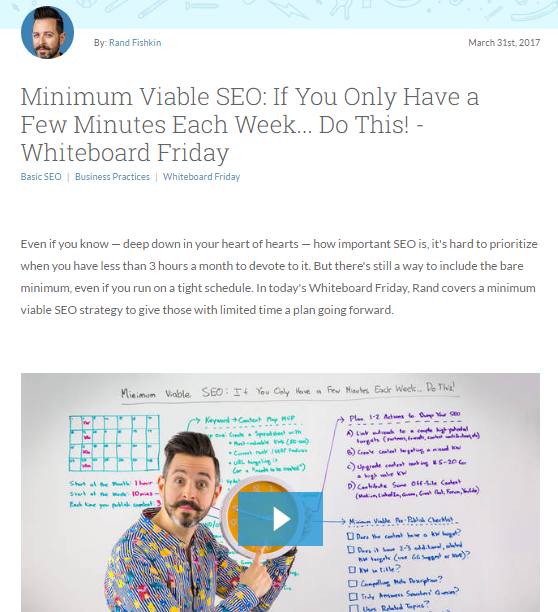 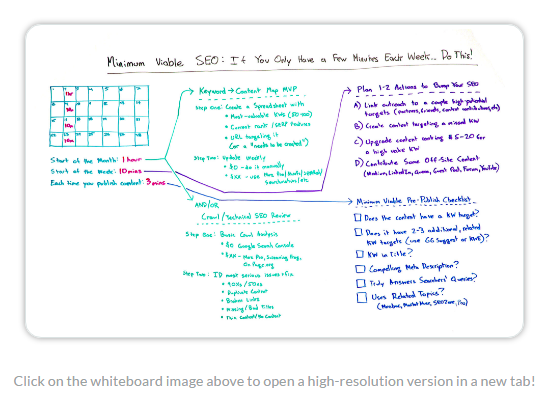 There’s something about seeing thoughts written on a whiteboard that stands out. Feels human, authentic, like you’re planning something with a friend or a teacher is educating you on something. The colors also work to engage.

Nir Eyal is the namesake for Nir & Far, a website about the psychology of consumers and habit-forming products. What marketer wouldn’t want to create “addictive” products?

Nir could have left it at that. He could have trusted that his topic alone would draw in an audience. But he decided to go further and include illustrations that make the presentation memorable and communicate his ideas faster.

In the presentation, Nir starts with a story about a science experiment at MIT involving a mouse. He links this to the way people build habits. More importantly, he gets into which products could become habit-forming to customers. 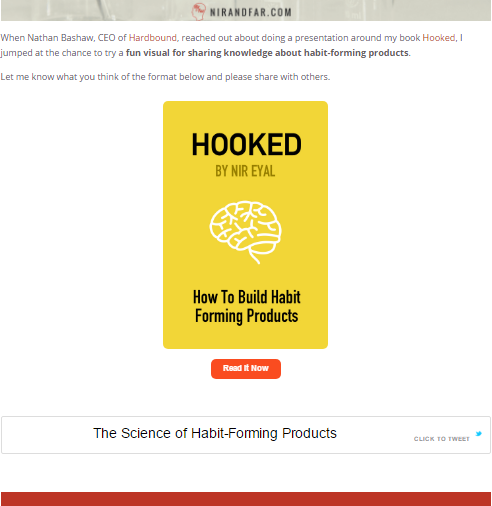 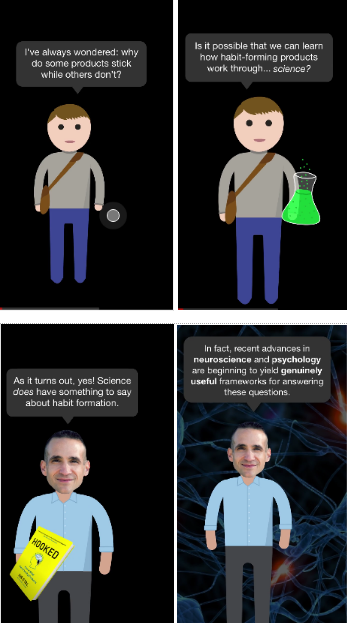 So how do you make your marketing messages not boring? Given the examples above, we’ve noticed a pattern. One of the biggest patterns is…

According to Buffer research, people are more likely to read an entire article if you start off with a story. Groove founder Alex Turnbull wrote and published that post after doing the research.

Here’s yet another example of why storytelling is so important. When Videofruit’s Bryan Harris first launched his online course, “Get 10,000 Subscribers,” he told a story in his pre-launch emails.

In the email, he mentioned about how 11 years prior he was actually engaged to be married. It turns out Bryan called off the wedding six days before it was going to happen and then fled to Africa.

When I read that in his opening email, I was pulled in. This is a very personal topic and I was curious why he included it in his email. I needed to know what came next.

He talked about how he ran away to Africa to avoid responsibility, and how his lawn care business that he was running at the time tanked. His story shows authenticity and a willingness to be open about something most of us would keep private.

As a result, he becomes like a hero (the underdog) in his own story. And who doesn’t want to root for the underdog?

So that story builds a personal connection.

You too can build a personal connection with storytelling. These stories can be about yourself, like how you started in business and how you’re helping people or how you overcame a failure or setback.

Be real! Add some emotion. Be open.

Once you do that, your message be 10X more interesting to consume. People will want to read your emails. Once you hook in your readers, you can add a segue from your story into your core offer.

Sell from the Heart

That brings me to the next point, selling from the heart. Now that you’ve hooked in your readers and formed a genuine connection, don’t lose it.

Now, that doesn’t necessarily mean you have to make flashy, gaudy offers. That will turn customers away. Your offer can be kind of boring, but if you sell from the heart, that will make it genuine. It’s more than “interested in this service? Call xxx-xxx-xxxx to schedule an appointment today.”

I means to inject some bit of your own personality and (likable) style into the message.

My best tip to sell from the heart?

Write in a conversational tone. And a good way to transition into doing that is to…

Speak in the First Person

We’ve already talked about the importance of speaking in the first person. In the five examples of seasoned marketers above, they are all successful because they speak as experts. They’re not writing as some anonymous brand (i.e. “We” the collective!)

They put their own face on their website in addition to a company logo. That helps to build trust. People want to connect with and buy from other people one-on-one, even if a company is much bigger than that one person.

A great example of this comes from Leadpages. Even though Clay Collins is the founder and still writes occasionally on their blog, Jeff, Tim Paige and a few others have become the face of the business.

Effective online marketing is largely due to the management of attention. One of the best ways is to get attention is to say something people relate to and are intrigued by.

You want to be interesting. You want to connect with your audience to generate goodwill and keep them engaged. Customers will be excited to open your emails every single week. That relationship will either lead to them buying from you or referring business to you.

What can you do to make your marketing more interesting? Are you ready to stop worrying and love the sale, too? Tell me how in the comments below.

Have you ever wondered while thinking about your marketing… “Is THIS the best thing for me to be working on...