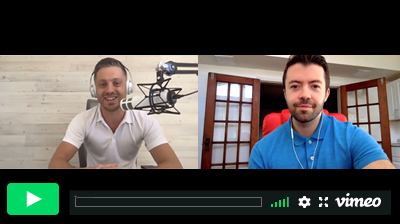 How to Build a Multi-Million-Dollar SaaS Business w/ Chris Ronzio Founder of Trainual.com

“We’ve got a camera. Let’s just tape anything for money.”

That’s what Chris Ronzio, creator of Trainual said before starting his first business.

In this interview, Chris teaches us how to build and scale a successful 7-Figure SaaS business.

Trainual is a SaaS tool that helps businesses (especially business owners, founders, and CEOs) streamline internal systems and document workflows so they can escape chaos and turn their business into an efficient machine.

With a team of 18 people, and after only 19 months in business (well, technically since Chris “took the leap” and decided to focus on app over consulting), Trainual is already making just shy of $3,000.000 in Annual Recurring Revenue (ARR).

Not too shabby, right?

But that’s an understatement because the results are great. Many SaaS apps never make it past a few thousand dollars per month… I had to ask Chris, how’d they grow so darn fast?…

If you are a startup looking for some motivation, or the owner of a business with ambitions to keep scaling, I think you’ll extract a number of “gold nuggets” from this interview with Chris.

[02:56] Chris tells us how he started trading time for money in his early jobs servicing other people and how that pushed him to start his first business.

[03:20] Most successful entrepreneurs dabble in the entrepreneurial world early in life. Chris admits comparing his compensations to his friends’ during his teenagehood, and how his were always higher.

[03:35] He talks about the importance of entrepreneurship and its way to recapturing its value.

[05.15] He reveals how he was pushed into the training model business and the impact hiring camera operators had in the decision of founding Trainual.

[05:50] Chris reveals the role niching plays in his business and its relevance to the path he took for Trainual.

[08:48] “There is chaos in every business, and if you’ve got opportunity, you’ve got chaos.” He explains the meaning of chaos for his business.

[11:02] He shares the ideas he had for his first businesses and why they were so valuable for other companies.

[17:40] Chris confesses to having suffered from the shiny object syndrome and how he overcame it and focused on what matters.

[17:47] He states that his passion for helping small businesses solve their systems led him to systematize his own offer.

[18:18] Chris explains why transitioning from one business to another is an evolution more so than chasing shiny objects.

[19:12] Chris explains how Trainual went from being a tool for consultant clients to becoming a business, and how it has become the solution for businesses who don’t have any training nor any standard procedure.

[22:18] He opens up about how his consulting business made him ignore the opportunity of migrating to a software business.

[30:20] Chris goes in-depth in the evolution of Trainual—from being an onboarding and training tool to a 7-Figure SaaS platform.

[33:30] He reveals the secrets in Digital Marketing that allowed him to scale his business so quickly and the importance of Facebook and Instagram as huge channels for his business growth.

[41:25] A recommendation Chris gives for hiring people is to network and find people you want to work with.

[12:20] His response in how to face problems in any business and to not keep repeating them is clear: “write down what you’ve learned, share it with the rest of the team, put it in a playbook, and train the new people on it.”

[44:00] “The more people you bring in to your company, the more ideas you’ll have”. The biggest challenge Chris has faced while scaling his business is accepting that everything can’t be done at once.

[47:30] His advice for anyone building a playbook for their business is inspiring: it is never too soon to start.

[47:40] The 3-step process that he applies for Trainual and that applies for any role in any business is clear: learn to do something, do it consistently, and document it so you can delegate it.