Sales Funnel 2016: Is This the Best Political Ad of the Year?

Home » Blog » content marketing » Sales Funnel 2016: Is This the Best Political Ad of the Year?
By Matt Ackerson — Get free updates on new posts here 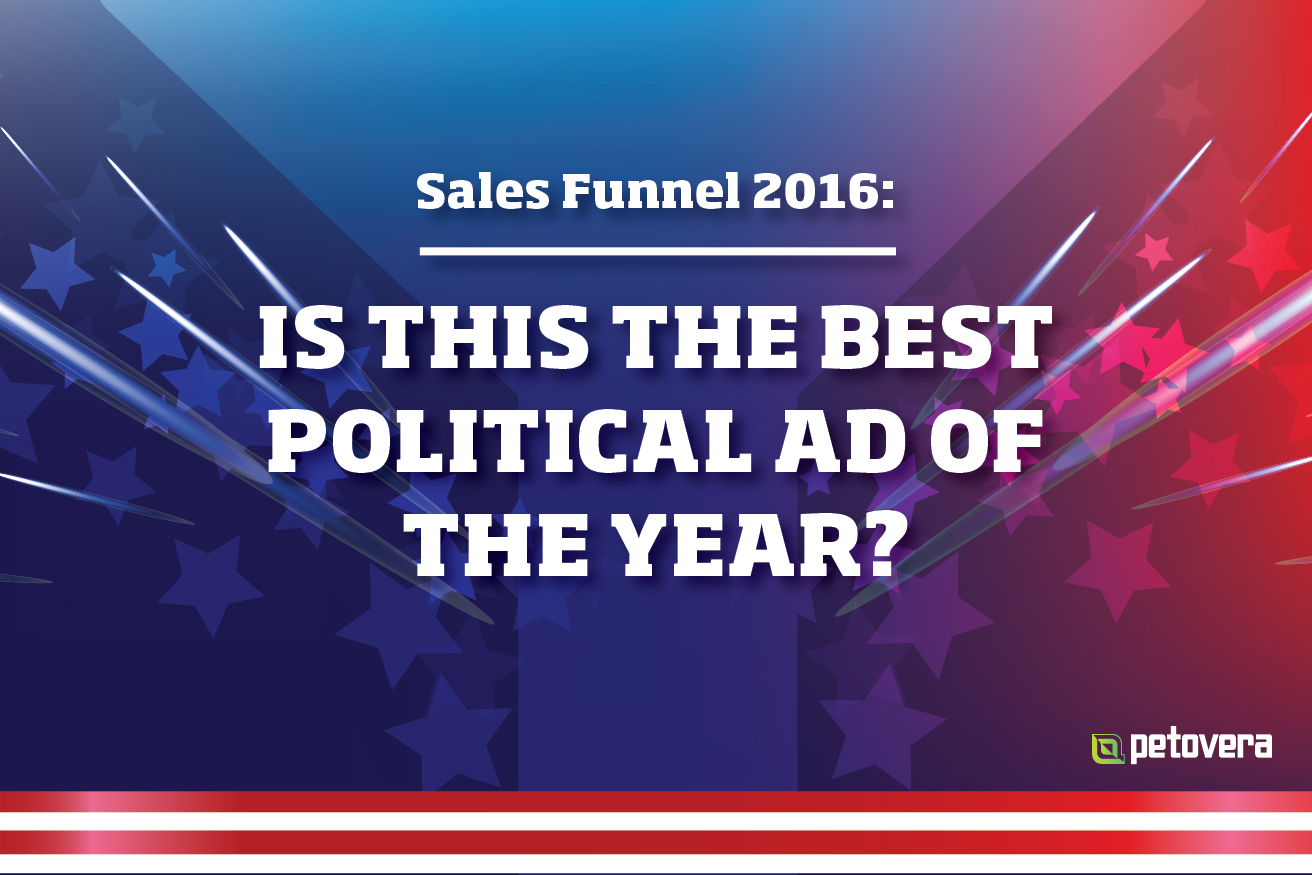 We’re covering all the high-converting points in the U.S. Presidential Election. For all the best insights and analysis, keep it tuned right here.

Political advertising is an animal of its own. That’s why it’s one of my favorites.

Political ads borrow all kinds of marketing and persuasion tactics—and this year, the gloves have come off.

Many are designed to get a rise out of the audience—perhaps, to make them fearful or angry. Take, for example, some of the tactics we included in last week’s analysis of the Clinton and Trump campaigns.

In the larger 2016 election, there are a host of other ads designed to convert even the coldest of audiences.

They stand apart from what you expect to see on TV or hear on the radio. They stop you in your tracks. They are chilling.

And you know them when you see them.

Today’s topic is one of those ads. Ten minutes after re-watching it, I had to sit down and dismantle it. That’s how good it was.

Before you read on, take a second to watch the full ad.

It’s working on a number of levels you might not have considered. The visuals, the language, the unique use of the human face, and the soundtrack all come together to make one “weapons-grade” persuasive piece of marketing content.

And I don’t want to call it too early, but I think it may be one of the best political ads this year.

It’s hypnotizing, mesmerizing, and everything an effective ad should be.

It would be a mistake to just label this ad as ‘unique’ (even though it is).

There are a symphony of strings being plucked. It’s just shy of two minutes and layered with micro persuasion techniques.

And each of these micro techniques is influential on its own.

For the sake of this article, I will label each technique as a ‘level.’ 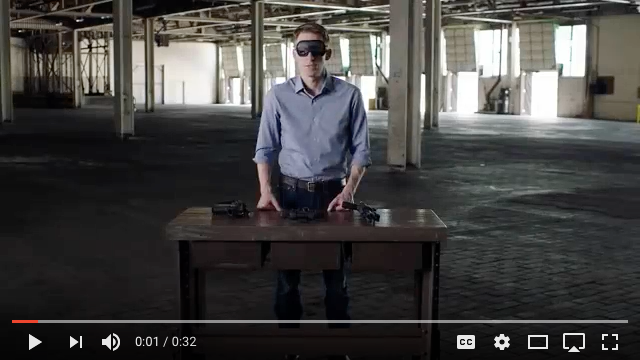 We see a man wearing a tucked-in collared shirt with rolled-up sleeves. The setting is an abandoned warehouse.

This is a ‘pattern interrupt’—a term used in marketing for the opening to a sales message that’s not expected. If you’re familiar with Neuro Linguistic Programming, or NLP for short, you’ll recognize this tactic. The goal of the pattern interrupt is to gain someone’s full attention by doing something unexpected.

Why is this effective? People are so used to seeing a particular ad that they recognize the familiar pattern and automatically categorize it in their mind—therefore, potentially missing the message.

Or, worse—they change the channel.

When you take away this mental block by doing something unexpected (interrupting the collective pattern), you now have their full attention—What’s going on? What does this ad mean? What’s coming next?

Political ads follow a pattern, and Kander’s opening interrupts it in more ways than one. 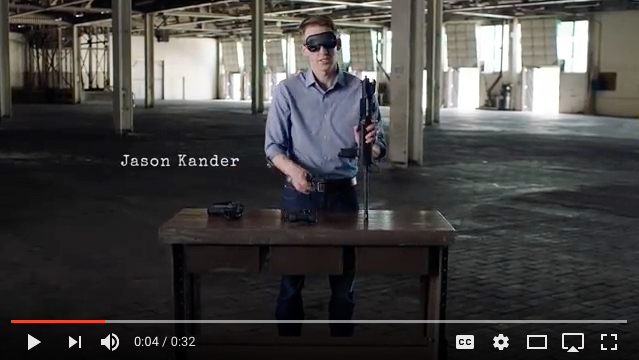 Next, we see him holding a rifle.

A gun, especially an intimidating military-grade weapon, is a striking visual for any audience.

In a study from the University of Alabama, Dr. Shuha Zhou explains,

“Arousing visuals are ubiquitous in television news because they attract attention and elicit arousal. . . . Emotionally arousing images not only have the power to sustain attention[, ]but also exert substantial influence in the assessment of a message.”

This makes it hard to ignore it, let alone turn it off.

Level 2—Use of Language 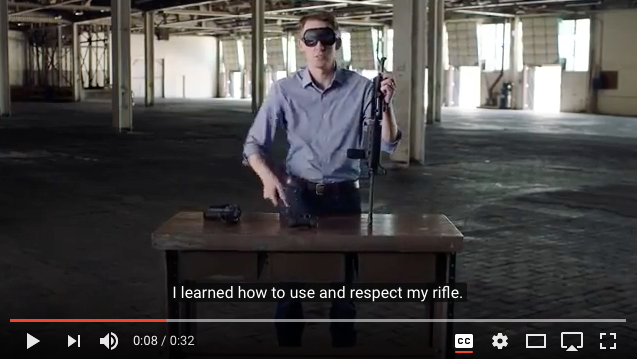 Here’s where the next level of persuasion comes in. Pay close attention to the words he’s using.

He introduces himself: “I’m Jason Kander, and Senator Blunt has been attacking me on guns.”

In this first sentence, he introduces a conflict.

We’re engaged. There’s a story to be told.

He assembles his gun, blindfolded.

“Well, in the Army, I learned how to use and respect my rifle. In Afghanistan, I volunteered to be an extra gun in a convoy of unarmored SUVs. And in the state legislature, I supported Second Amendment rights.”

He clicks the gun. Hard. Again and again.

This conveys the idea that he’s prepared and knowledgeable. The message isn’t only about what he’s saying, but about flexing his competency.

His background story is compelling—he’s demonstrating credibility and setting up the ‘hero’ pivot, from conflict to resolution.

“I also believe in background checks, so the terrorists can’t get their hands on one of these.”

He clicks the gun.

“I approve this message, because I’d like to see Senator Blunt do this.” 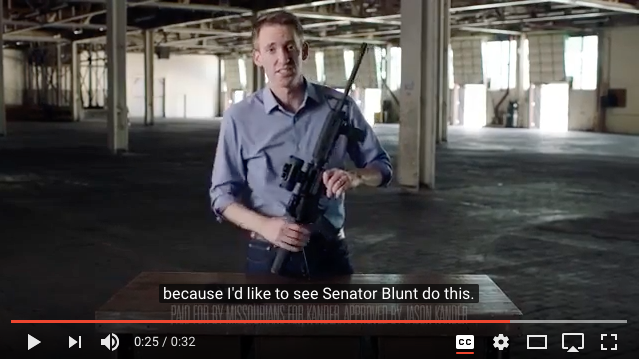 Now, I’d like to redirect your attention to one word in particular. It’s the most powerful word in this entire script.

It’s the word ‘because.’

Ellen Langer, the first tenured female psychology professor at Harvard, performed a study that illustrates this foundational premise in psychology: people are more likely to comply with what you want them to do when you use the word ‘because.’

“If the stakes are high, then there is a little more resistance [than automatic behavior to a simple request], but still not too much. Use the word ‘because’ and try to come up with at least a slightly more compelling reason [to gain compliance].”

The use of ‘because’ in the ad provides a meaningful reason for the entire ad.

He’s not just demonstrating his expertise and telling his backstory; he’s doing it, because Senator Blunt can’t.

This encourages the audience to agree subconsciously with his message, as does the next level of persuasion.

As I mentioned in the hidden persuasion techniques behind the Star Wars trailer article, music can have a significant influence on a participant’s perception.

The use (and lack) of sound in this ad is powerful.

The only sound besides Kander’s voice is the continual clicking of the gun. It bounces off the empty walls of the warehouse.

The gun clicking acts as a soundtrack for the message. This utilizes a high-level persuasion technique noted in this psychology study by the Journal of Broadcasting and Electronic Media:

“…the emotional response to a sound clip is predicted by the level of interest generated by the sound and how well the sound captured the participant’s attention.”

You’d agree the the click of a gun generates a high level of interest, right?

This enhances the audience’s subconscious engagement level—by working to continually capture their attention and pull them right back in—through the use of a sound that generates a strong emotional response.

After the last click, in particular, something happens. There’s silence.

Then Kander removes his blindfold, revealing his face. 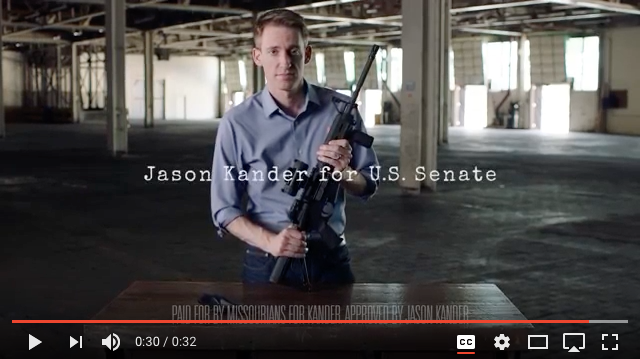 Let’s talk about the elephant in the room.

Why is Kander blindfolded, assembling a military-grade weapon?

One obvious reason: the blindfold makes the audience curious.

It also enhances his credibility—hey, I can assemble this blindfolded.

But it also helps the audience remember his face.

Because of the layers of intrigue and emotion, the audience subconsciously draws a connection from his face to their feelings.

This leaves a strong imprint.

This means you can create meaning for any image or object.

That is precisely what Kander’s ad has done.

He could show his face in any other light, and it may not have the same meaning.

So is Kander trying to show the audience that he’s a badass (for lack of a better word)? Confident? Authoritative? The better choice?

The evidence certainly points to it.

After he pulls the blindfold back, revealing his face, he adds, “I approve this message, because I’d like to see Senator Blunt do this.”

Now you don’t just see Kander, you remember him.

The next time you see him, you associate his face with your emotional experience from watching the ad.

The Real Message Behind the Ad

There’s a quick point I want to make.

It’s clear that this ad is a case study in effective video advertising and layering multiple persuasion techniques. But Kander does one thing exquisitely well, which differs from the political ads we see cluttering the TV and internet.

Explicit advertising has an obvious message—it tells the audience exactly what it is communicating.

An implicit message is subtle. It communicates its message indirectly, making the audience connect the dots.

It’s not about telling his audience what to think. He doesn’t scream his message at them.

Kander’s ad makes the audience think. He gives them the information, while layering in persuasion tactics to subtly influence the audience’s perception of the message.

An explicit message can sometimes backfire—especially on a sensitive subject.

For example, Kander could have stared into the camera, explained his position on guns, and asked the audience for their votes.

But gun control is a touchy topic. The audience might immediately change the channel at the mention of guns.

This kind of implicit message is more engaging to the audience. It’s more effective.

Before you think about advertising your service, you need to get inside your audience’s heads.

More importantly, remember that successful advertising should effectively influence and persuade. It’s not just about broadcasting your offer or service.

It’s about playing into the psychology of your audience.

Understanding why people do or think things will help you cater to your customers.

With this knowledge, you can construct a sales funnel that converts.

Or you can optimize your current funnel by filling in the holes.

Seeing your service through your customers’ eyes will help no matter which step you’re at with your small business.

So I have to ask—

Looking at your (current/future) website, which level of persuasion could you use to make your ads effective?

It’s AutoGrow here with your 2016 Presidential Election Breakdown! Tonight we have two competitors going head-to-head in the race for the...