It’s AutoGrow here with your 2016 Presidential Election Breakdown! Tonight we have two competitors going head-to-head in the race for the White House.

For the best insights and analysis of each presidential candidate’s sales funnel, stay tuned for up-to-the-minute coverage.

Regardless of your opinion or for whom you’re voting, let’s agree—this year’s cycle has been something.

We’re a month away from what may be the most contentious presidential election in US history.

Yet, controversy, publicity stunts, and gimmicks aside, I’m writing this article for a significant reason.

What the Super Bowl is to football fans, this presidential election has been to me.

Political news is nothing but the study of people—and this election cycle has been a case study in positioning, the psychology of persuasion, and marketing strategy.

So What Does the Presidential Election Have to Do with Sales Funnels? 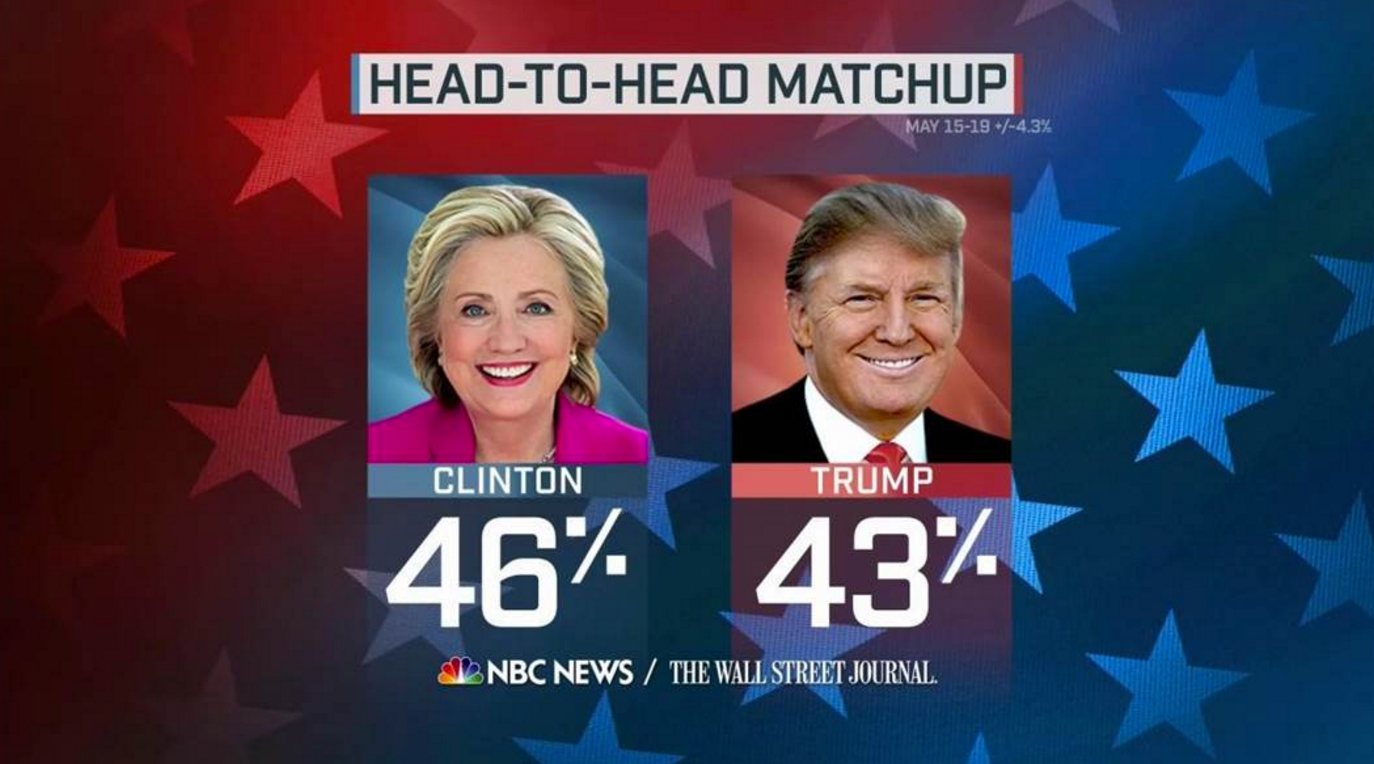 As I’ve said many times before, you can learn a lot about sales funnels from watching the news.

In fact, we are surrounded by sales funnels on a daily basis.

We see them. We hear them. We’re in them.

Every month each one converts millions of dollars in contributions from American citizens.

Each candidate’s sales funnel is composed of stages.

All of these stages work together to hit the “conversion goals.”

But this funnel is not just selling an eBook. It’s selling ideas about the person who will sit in the Oval Office.

So it’s a little more complex, but nothing you can’t digest over a cup of coffee.

Since you’re reading this, you’re already familiar with sales funnels. So, you may already know that the stages to any sales funnel can be boiled down to 3 components:

Marketing assets—like emails, ads, or landing pages—are layered within every stage. Each stage organizes these assets to funnel someone to the next.

The classic sales funnel usually looks something like this: 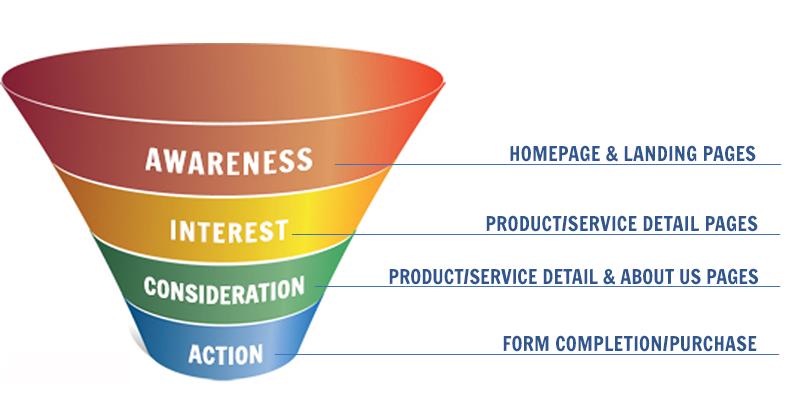 The presidential funnel looks similar, but each stage’s components are different than for a business.

At the top of the funnel, you have media coverage for each candidate’s speeches or interviews.

People might move to support one candidate or another based on what the issue or news story is and how they interpret it.

Then people might go on social media to discuss, on Google to do research, and some end up on the candidate’s website. They may also end up on another site that supports the same candidate with a similar conversion goal.

In the example below from the website GOP.com, you can see there are multiple conversion goals including donating and registering to vote. 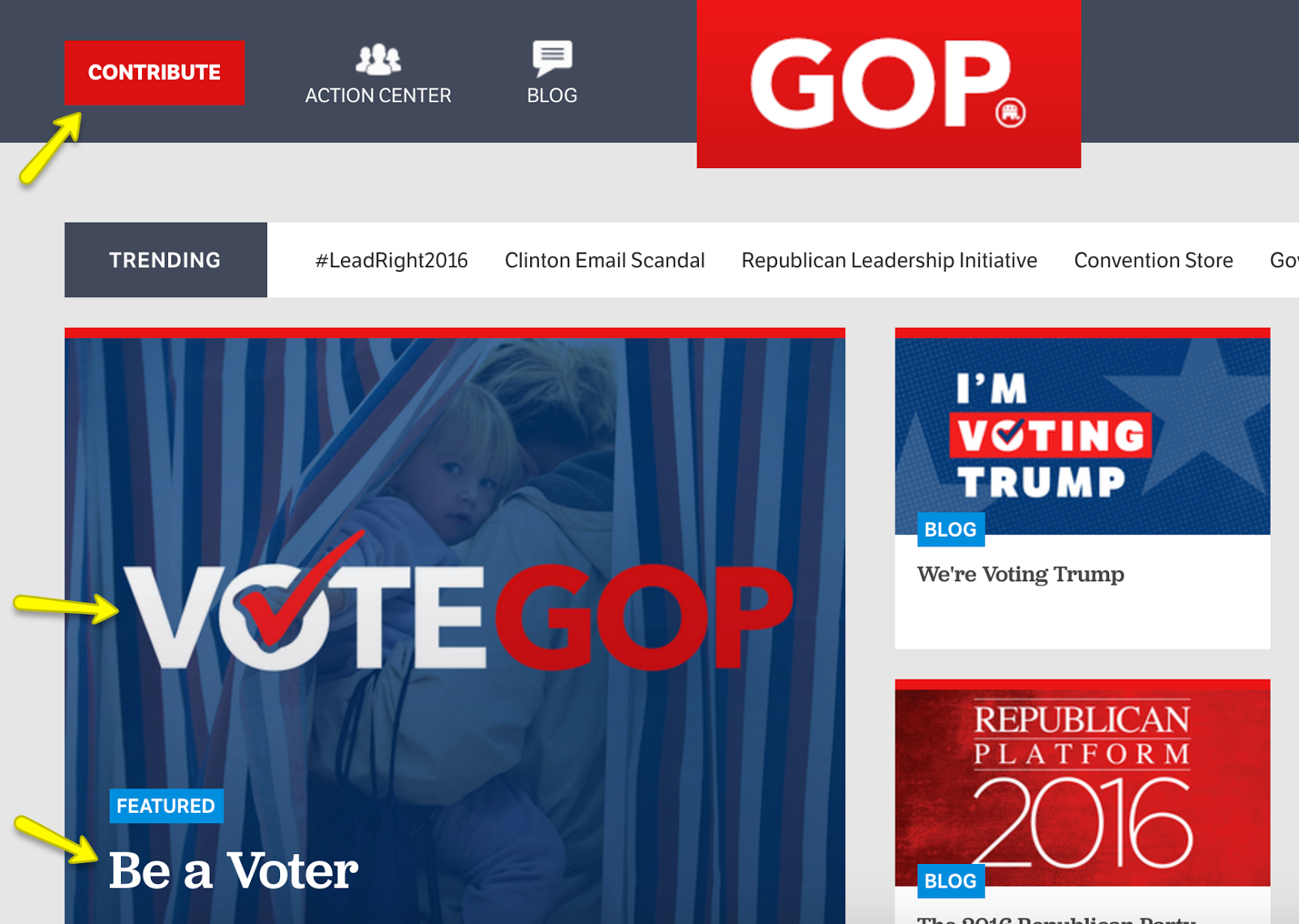 Ultimately, the “buyers” in this presidential marketing campaign are voters.

You could break it down further, but that’s the big picture.

What are the Conversion Goals of the Presidential Funnel? (And Who is Winning?)

The first conversion goal is to gather donations.

For the past few months, this has been the conversion goal for each candidate’s funnel.

Gathering donations can translate into more than campaign revenue—it can mean votes.

For instance, a growing number of donations month to month is good social proof.

If a campaign has a particularly good month, it can attract more attention and donations: “Hey, look! All of these people support us.”

The candidates have been successful at hitting their donation goals thus far. Here’s a look at the exact numbers of how much was raised in donations for each campaign month-to-month:

*Note that the above numbers include itemized and unitemized funds, loans, and transfers.

Being a lead in the presidential funnel means being a potential voter.

So the first conversion goal is to secure donations and leads.

The second and ultimate conversion goal goes without saying: to become president.

But there’s another thing standing in their way.

A candidate can only achieve this goal if they get more votes than the other candidate.

So it’s not just a funnel made to convert, but rather out-convert.

And that’s where things get even more interesting.

Let’s dive into the tactics each candidate are utilizing in their marketing campaigns to out-convert the other one.

The Top of the Funnel

The top of the funnel is how the candidates attract prospects through marketing.

Let’s examine how their prime pieces of marketing differ.

For example, examine the following ads: 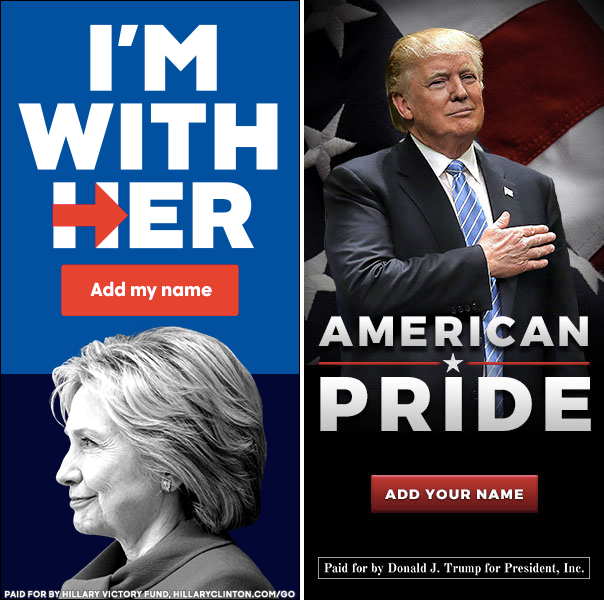 The political difference is clear: Hillary’s ad focuses on being part of a team and the historical significance of electing the first woman president—“I’m With Her.”

Trump’s focuses on being part of a larger, all-inclusive team—Americans. “American Pride” and the hand-over-heart placement play off the feeling of patriotism.

Side note: this idea has a psychological effect. We wrote about it in another recent article that analyzed the ISIS marketing funnel.

Trump and Clinton’s Calls To Action also differ in their approaches.

Hillary’s is from the prospect’s point of view (“Add my name”), while Trump’s (“Add Your Name”) is directed at the voter.

In the case of CrazyEgg, one of the most optimized sales funnels on the web, using the prospect’s point of view can be more effective (e.g. “Show Me My Heatmap).

Here are a few more:

In the above ad, Clinton uses social proof from an authority and has a better, more specific Call To Action, (“Read her jobs plan”).

Trump is tugging at an emotional trigger in his approach. The image he uses is interesting: the ‘worker’ resembles someone everyone knows—their hardworking father or grandfather. His ad’s copy makes declarative statements that inspire a feeling of American pride and the idea of ‘winning.’

Except for two things:

The jury’s out on this one, because both have strong pros and cons.

If I had to bet though, I’d bet on Hillary’s ad in this case. It’s clear that it’s for her campaign, but in Trump’s ad, you can’t see his face—only his name at the bottom.

Plus, ‘adding your name’ is a lower bar to get over compared to ‘donating.’

Then, there’s the ads that bash the other candidate:

The most eye-catching thing about Trump’s ad is how he has chosen to show an image of Hillary looking down and appearing somber.

She may even be reading something on her phone, which brings to mind the recent email scandal.

This ad could also be effective, because her eyes are pointed down toward the headline.

A case study from ConversionXL Institute suggested that conversions increased on a landing page when a person was staring at the Call To Action.

The headline—“Hillary Clinton’s Ten Inconvenient Truths”—is like a listicle seeking to educate. This incites natural curiosity.

As for Hillary’s ad, she pins Trump’s own words against him with an image of him smirking.

However, display advertising isn’t the only way candidates are attracting prospects.

This tweet is almost like a “recruitment effort”—he’s not just trying to convert leads; he’s trying to grow his market of potential voters.

Now that we know what the top of the funnel looks like for each candidate, let’s see how they’re converting the prospects that flood their funnel.

The Middle of the Funnel 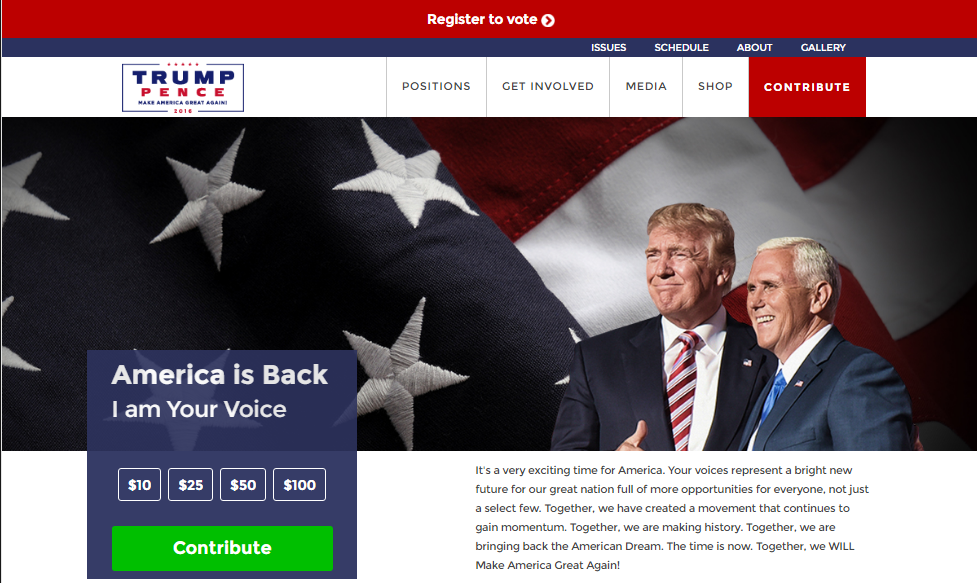 Trump’s landing page is pretty clear: he’s standing up for those viewing his site. His message is focused on inclusion—“I am your voice”—and national pride.

His Call To Action is pretty obvious, too.

The Call To Action copy further acts on this feeling of inclusion—‘Contribute.’

‘Contribute,’ as opposed to ‘Donate,’ emphasizes a group effort toward a common goal.

Contrast that with Hillary’s landing page:

She uses it to gather leads by making everything about you, the voter: “Find out how much Hillary’s college plan will save you.”

Note the difference in the word choice as well: ‘chip in’ versus ‘contribute.’ The latter is more effective on an emotional level, in my professional opinion.

Her site also doubles as a platform where she publishes blogs on everything from her plans for America to Trump’s mistakes.

The Bottom of the Funnel

Neither Hillary nor Trump skimp on the importance of following up.

In this game, it’s paramount because of the ongoing conversion goal to convert an email subscriber to a donation and a donation to a vote.

Once you opt-in to their email lists or make a donation, you’ll start getting a string of emails like these: 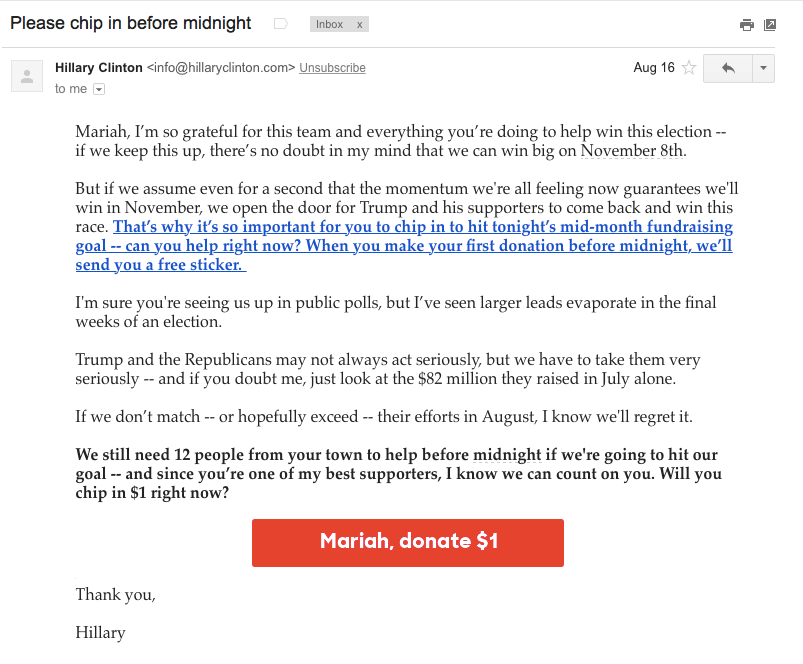 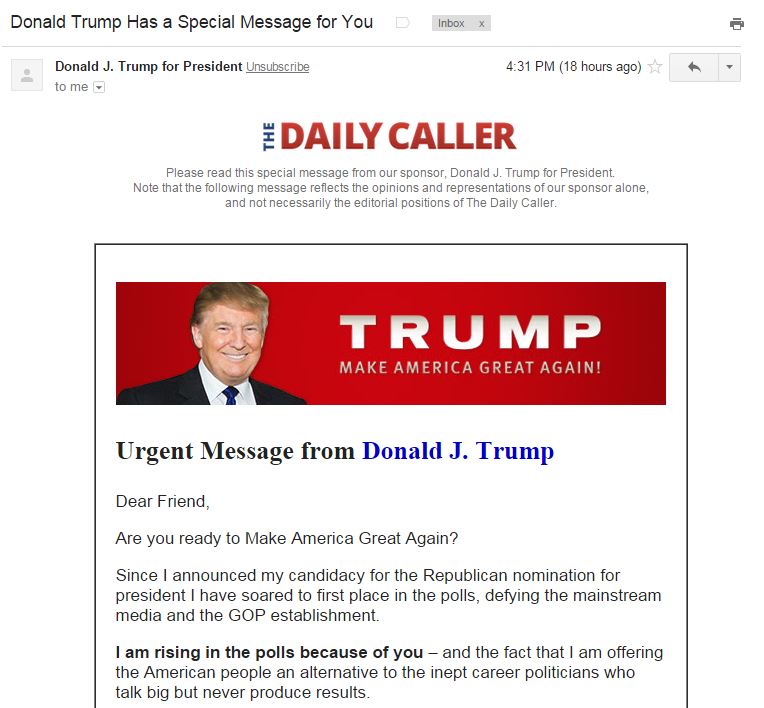 Emails like this are sent regularly to continually convert leads—or collect donations—again and again.

So Who Out-Converts Whom?

Each candidate already used these tactics to out-convert their party’s other candidates.

But between Hillary and Trump, the race is still too early to call.

The main takeaway—the presidential funnel is structured to convert prospects to leads and leads to voters.

Each candidate has different conversion strategies, and whichever strategy converts more leads will claim the glory.

As we get closer to November, both candidates will optimize their funnels.

Keep an eye out for those optimizing “components” each candidate adds—like a paid dinner with the presidential nominee.

And watch how well those add-ins convert. You can follow along from a marketer’s perspective by subscribing to both candidate’s mailing lists.

This has been your first presidential sales funnel coverage of the 2016 election season!

I’m Matt, and we’ll see you next week.

P.S. Have you ever dreamed of optimizing your sales funnel like the presidential candidates are? We have some ideas. Click here to see a demo of what you can ‘add on’ to your funnel to convert better.

One thought on “The 2016 Presidential Marketing Funnel: Trump vs. Clinton. Who Wins?”

I was hunched over my laptop. I kept hitting refresh. The sales should have been rolling in. After weeks of going...